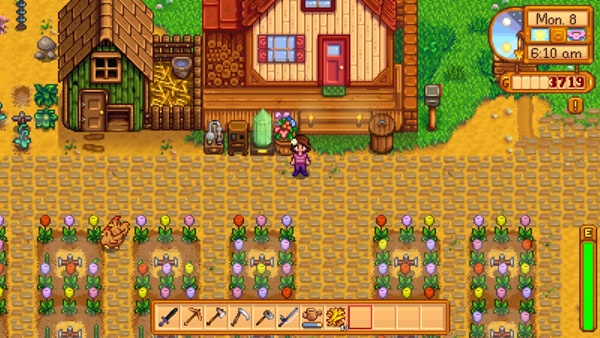 Stardew Valley has been an insanely popular game since its release on Steam in 2016. Despite this, I had never gotten around to playing it. Once I saw that it was coming to Switch, I knew I had to give it a shot, and it was well worth the wait.

Stardew Valley is a Harvest Moon-like game that is great fun to play. You spend your in-game time racking up cash, getting to know your neighbours, and exploring dungeons. You can even find artifacts to donate to a museum, which is a fun little side activity.  It’s a simple concept, but it can have you hooked for hours at a time.

In Stardew Valley, your main goal is to make money. You can do this in a variety of ways, such as farming, fishing, or foraging. To assist with these various activities, you can go into the mines to gather resources that can be used to craft items such as sprinklers or recycling machines, making your farming less cumbersome.

Setting up your farm and getting used to various activities all feels tedious and overwhelming at first, but as you advance through the months and get the ability to build sprinklers, it gets less and less time consuming. The best way to make money is to farm. After a year of in game time, you should have an efficient farm that waters itself, allowing you to rake in the dough with little effort. There’s nothing more satisfying in Stardew Valley than making over 100,000 gold in one night.

Some of the skills are fun to grind, but others can be mind-numbingly boring. Mining and combat levels are earned by traversing the mines, which is fun, and gets you resources to improve your farm. Fishing, on the other hand, has you stand around all day pressing the Y button. Fishing will probably make you more money than mining will, but it’s the Stardew Valley equivalent of running around tall grass and spamming A in a Pokémon game to grind experience.

The biggest problem I have with Stardew Valley is the lack of any sort of meaningful story. You get the choice between siding with the Mayor or siding with ‘Joja Corporation’, but I don’t feel as if it really matters. Siding with Joja seems to be the easy route, as you just pay for upgrades, whilst the Mayor’s route has you gathering different crops and items over the months.

The villagers also lack depth, with every character being so two-dimensional that I struggle to care about any of them at all. You can speak to a character every day for an entire month, and they will just repeat the same four or five lines of dialogue the entire time. This is a huge shame, as it doesn’t even seem like it’s something that would be too difficult to fix.

The only time you get more lines are if you boost your friendship level, but it doesn’t feel like a significant change. Even when you eventually get married, your partner still only says a handful of things, making it hard to feel attached to them. (If you’re curious, I married Penny.)

Stardew Valley is the perfect game to own on the Nintendo Switch. I didn’t really see the point of Stardew Valley on any other console from a consumer standpoint, as it can run on low-end computers. The Switch version, on the other hand, makes complete sense. Not only can I play this at home on my TV, I can play it at home in bed whilst watching TV, or between my University lectures. Like Sonic Mania, this is the type of game that I feel the Switch is perfect for. High-quality games that have benefit significantly from being on Switch. The Switch is also getting the multiplayer update before any other version, making this an even more compelling buy.

I’d wholeheartedly recommend Stardew Valley on Switch over other platforms. I’m sure it’s fine on PC and consoles, but the added ability to play it on the go is such a huge and valuable bonus, especially with it’s extremely low price point.

Stardew Valley on the Nintendo Switch earns a solid 8/10. 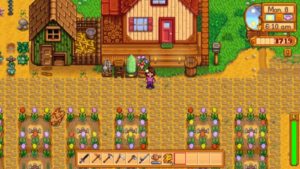