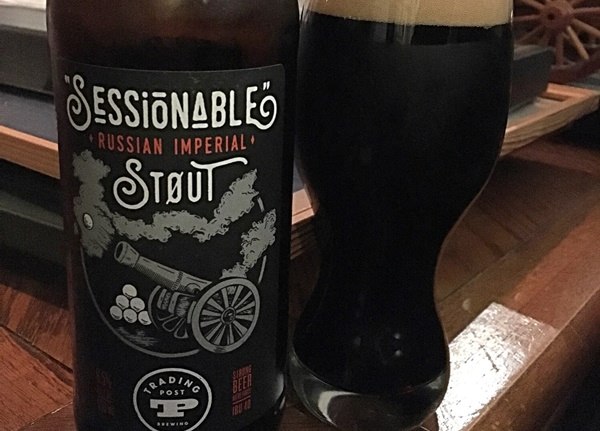 For the inaugural edition of B.C Beer Reviews with Nic Hendrickson we will be taking a look at one of the newest beers from Trading Post Brewing, their “Sessional” Russian Imperial Stout. This is a different take on the traditional RIS style, but with a lower ABV of just 8.5%. Let’s take a closer look.

Before we dive into this beer we first need to take a look at Trading Post Brewing. They are still a relatively young brewery in British Columbia, but that doesn’t mean they don’t come with some seasoned heads in their brewery.

Brewmaster Tony Dewald is a well-known name in the B.C. beer scene, and very well-respected as well. Dewald has been around for over two decades, and he was most recently at Old Abbey Ales in Abbotsford, B.C.

His experience in brewing and the industry itself has brought a seasoned head to Trading Post, something that has helped them to quickly make a name for themselves.

The colour of this beer is right in line with the style: dark as night. The head has colours of the brown sugar that you will get hints of, and the body itself is very dark. Spot on for a Russian Imperial Stout.

This is one thing that many people have a relatively hard time doing consistently. It is kind of a hit-and-miss thing to actually smell what the brewery wants you to. But with proper and effective brewing techniques a beer like this can have a very noticeable nose to it.

The nose on this beer is sweet, and just a little boozy. The bottle says to look for notes of brown sugar and dried fruits. When dipping my nose down into the glass I definitely got the brown sugar and a bit of a bourbon boozy scent to it, but not much of the dried fruits. But, as said before, every nose smells differently.

The boozy scent in the nose is subdued, but its presence adds a nice complexity to the traditional aromas of this style of stout. The brown sugar adds another level of sweetness to it, but holds back enough to not be overbearing.

Overall the nose/aroma is very pleasant and is a good way to get a hint on what is to come when taking your first sip.

The first thing that I noticed when taking my first sip of this beer is the smoothness of it. Trading Post used the word “sessionable” to showcase it is a ‘light’ and drinkable beer, relative to RIS’s. They hit a home run in this sense.

The beer goes down smoothly, especially for something coming in at 8.5% ABV.

Their is nothing groundbreaking in the taste of this beer. That’s not to say it’s a run of the mill RIS, but rather that it keeps things somewhat simple. The smoothness and the nose help to carry the load for the straightforward flavour.

The taste is simple, but good. A smooth drinking beer for 8.5% points to this being a very well-done beer.

One of the other things that stuck out was the fantastic head retention of this beer. The initial pour wasn’t a hard pour, but somewhat close, resulting in a good head to the beer. This head was retained for the period of drinking the beer, albeit quick (don’t blame me, it was good!).

While the bitterness was virtually nonexistent, there was a very small note of the hops involved in this beer. You would be hard pressed to notice them. I allowed the last few drinks to warm up a bit before finishing the beer and this is when they started to become very slightly noticeable. Nothing to scare off those of you who do not like bitter beers.

In order to judge this beer effectively, a grade is going to be needed here. The colour was spot on with the style, the nose was overall very pleasant, the taste was good, and the head retention and extremely subdued hops were nice.

All in all, this was a great beer that comes with a high recommendation.

If you’re looking for pictures of B.C. beers, follow me on instagram: nhendy5. You can also add me on Untappd for all my brief beer reviews on there at RedArmyNic.

And if you’re looking to help families in need for the upcoming holiday season, be sure to check out bccraftbreweries campaign to help raise money. By donating you can win prize packs from up to a dozen B.C. craft breweries.