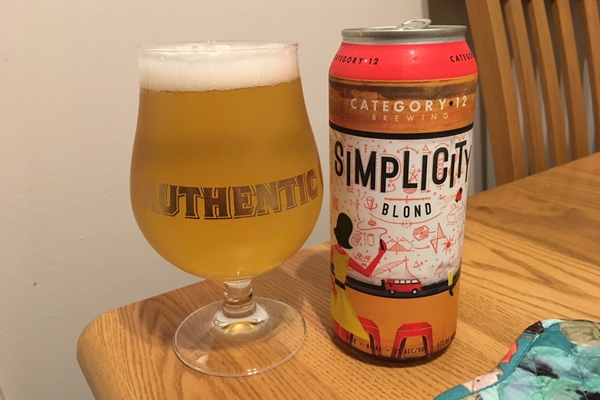 B.C. Beer Reviews is back to take a look at a blonde ale from the multi-award winning Category 12 Brewing. While this respective beer has not won any major awards, it is still surely one worth checking out.

Category 12 Brewing is well-known for making good, and sometimes odd, beers. They have a ‘mad scientist’ vibe to them that many have come to appreciate. And it is because of this love for science that they have been able to churn out multiple award winning beers.

As stated above, the Simplicity Blond from Category 12 has not won any major awards, but it is still a tasty beer. Let’s take a look at another solid beer from the Vancouver Island-based brewery.

A nice bright golden, yellow colour to this one. There is a slight haze to the beer when the entire can was poured into the glass, but it certainly does not qualify as being hazy.

There is a nice sweet malty nose/aroma that you would generally come to expect of a blonde ale. It is certainly the most noticeable scent in the nose/aroma, and it matches up nicely with the style.

The background notes are supposed to be slightly fruity and floral notes, according to the can. It does not specify what kind of fruity notes you should be catching.

I caught a good deal of the floral and almost earthy spice notes that are almost certainly from the hops used in this brew. I did not, however, catch any fruity notes to this one at all. If there are fruity notes, they are certainly subdued at first.

The first note on your palate matches up with the nose/aroma. There is a nice sweetness from the malt/grain bill in this one. This matches up well with the style of blonde ale.

The nice thing to the taste of this beer is the crisp, yet subtly, bitterness the hops impart on it. It is just bitter enough to give it a nice level of complexity, but certainly not enough to scare away the beer drinkers that avoid hoppy beers.

Overall this is a very nice and complex tasting blonde ale. The hops and grains/malts used in this have a nice balance and they play well together to make a very easy drinking ale.

As is the case with all Category 12 beers, the labeling/branding is unique and interesting. They always suit the science/mad scientist vibe that C12 looks to have. They are certainly very distinguished among the shelves of craft beer in British Columbia.

There was very little head to this beer, which is not all that surprising. The retention of that head was virtually nonexistent, but once again this isn’t a necessity for a blonde ale.

There is a very visible amount of lacing throughout the glass. From the top to the bottom the glass has a subtle layer and small rings of lacing. It is not, however, coated around the glass. Very sparse.

The carbonation level of this beer is perfect. Not overcarbonated at all, but just enough to add another level of crispness that compliments the spicy bite that the hops provide. Makes for a very nice finish on your palate.

The colour of this beer matches the style perfectly. There is a nice golden blonde colour, with a very slight cloudiness to it.

The nose/aroma is complex and inviting. It distinguishes itself well against the run-of-the-mill blonde ales out there. There is a noticeable hop characteristic, but it is not at all overpowering.

The taste of this beer is very nice. Good balance of the grains/malts and the hops used in it. The carbonation level adds a nice crispness at the end for a very easy and smooth drinking beer.

Have a beer you want to see featured in B.C. Beer Reviews? Comment below with your suggestion.

You can also see all of the photos featured in B.C. Beer Reviews, and some that do not make it into the reviews, by following me on Instagram: nhendy5. And if you want you see much more concise reviews up to 24 hours in advance, add me on Untappd: RedArmyNic.