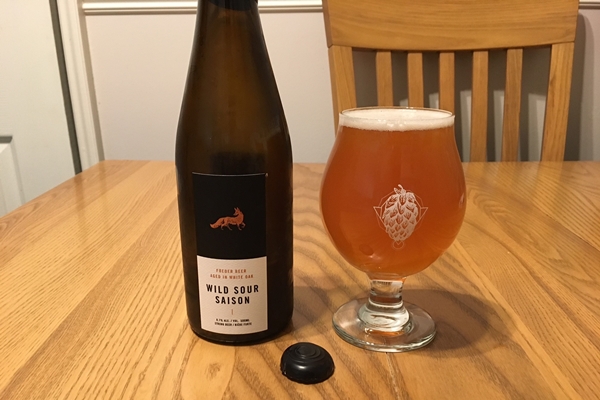 B.C. Beer Reviews is back to take a look at another beer from Field House Brewing. This time around we will be reviewing the beer released for their two-year anniversary of opening. In typical Field House fashion, they have combined a sour beer with a saison and released their Wild Sour Saison.

This interesting take on a saison was released for the celebration of two years of great beer from Field House Brewing. It was part of a day where they released beers from aging in their cellar, offered free brewery tours, beer cocktails, and some live music to go with it.

This beer looks to be a solid representation of what Field House does on a regular basis, sours and saisons. Let’s take a look.

This beer pours a light golden colour reminiscent of hay, which matches up well with the style and what is to come with this one. A golden colour, with a somewhat light copper hue, when the glass is full.

The nose/aroma has a very distinct sour note to it. The tartness is immediately noticeable, and it lets you know what to expect from taking your first sip. It is, however, a very pleasant level of sourness in the nose/aroma.

The other main note at play in this beer is the farmhouse/funky barnyard notes that you get with more traditional saisons. There is a bit of funk to this one. It goes well with the souring of the beer.

There are also noticeable floral notes to this beer, despite being well behind the first two notes in pungency. They are subtle in comparison, and they add a nice layer of complexity to this beer.

The combination of the sour notes and the barnyard/funky notes combine for an almost citrusy note of some sort. It is hard to place a specific type of citrus fruit, but it is there. All the notes at play in this beer combine for a very pleasant nose/aroma overall.

The tasting notes go pretty well hand-in-hand with the nose/aroma. The tartness comes off as strong and possibly face-puckering in the nose/aroma, but it is much more subtle in the taste of the beer. Certainly enough to be one of the stronger tasting notes, but smooth and enjoyable overall. Very well done.

Notes that you would typically expect from a farmhouse ale are present here. A bit of a funk, which once again goes well with the light tartness that is present throughout each drink of this beer.

There is a subtly oaky note to this one, but it is certainly in the background when compared to the sour and funky notes of this one. This is a direct product of aging it in white oak foeder for three months.

One of the most notable things about this beer is how the tartness of this beer mellows out significantly as the beer starts to warm up a bit. The funkier notes of the beer follow suit here, and it ends up being a very subtle and smooth blend towards the end of the beer.

Poured a moderate head into a tulip glass. The retention of that head was low. It dissipated rather quickly after starting to drink this one.

The carbonation level is above average. It adds a nice level of crispness to an otherwise smooth and tart beer. A very nice touch to this beer.

This beer would not be categorized as thin, but the body is close to that. It is a smooth-drinking beer, but a light body overall. It works well with the style and the level of tartness that is present throughout the beer.

The labeling/branding is simplistic but elegant. A nice black and white label with the Field House Brewing fox and nice lettering on it. Looks somewhat similar to a small wine or champagne bottle. Dipping the top in wax was a nice touch to the release as well.

This beer has all the notes you would expect from both a funkier saison and a moderately tart beer. It combines all of the notes in it smoothly and keeps them from fighting one another.

You can also see all of the photos featured in B.C. Beer Reviews, and some that do not make it in, by following me on Instagram: nhendy5. And if you want to see more concise versions of all these reviews up to 24 hours in advance, add me on Untappd: RedArmyNic.