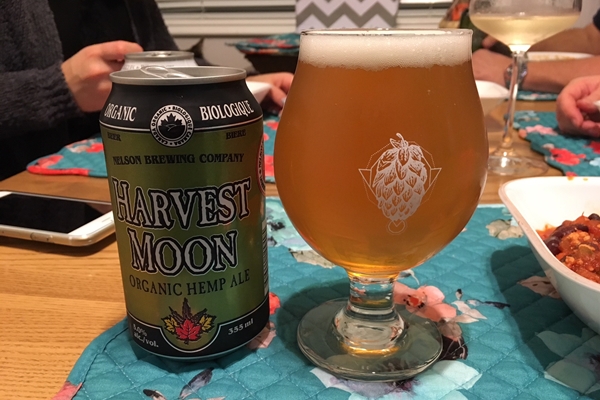 B.C. Beer Reviews is here today to take a look at a rather interesting beer. Almost every style of beer on Earth uses a plant in the brewing process (hops, of course), but this one takes a step into using the hops close plant cousin. The Harvest Moon Organic Hemp Ale from Nelson Brewing is truly one of a kind in this sense.

Nelson Brewing has put one of the more versatile plants around to use in a new way. The use of hemp in beer is certainly not a common practice, but if it can be used to make food and even paper, why not try it in beer?

And when you pick up a can of Nelson Brewing beer, you expect to taste quality. Having started up in 1991, Nelson is one of the few breweries that can boast longevity and even beating out the craft beer wave in British Columbia.

Let’s take a look at if this one turned out to be as good as it was interesting.

For those of you who are not aware, this is a German-style Kolsch Ale, and with that being said it matches up in the colour department. It pours a translucent golden colour from the can. When in the glass it gets slightly cloudier, which you would expect from a typical Kolsch. Bright golden in colour and the clarity is still very nice.

There is a noticeable breadiness to the nose/aroma of this beer. Lighter than the average Kolsch in this respect, but much more than a typical lager. It is somewhere in the middle of those two styles.

Another aroma that is noticeably present is a grassy and vegetal characteristic. Had the hemp not been made clear in the name and on the label, it would have been very difficult to place what exactly was imparting that aroma. Comes off as an indistinct grassy scent.

As expected, the sweet aroma of the malt/grain bill and the yeast strains commonly used in this style are quite strong. Aside from the grassy aroma, this is pretty well spot on with the style throughout.

The tasting notes pretty well match up with the nose/aroma. The bready and yeast characteristic is just as strong and everpresent on your palate as it was in your nostrils. A common note of this style.

The malt/grain bill imparts a strong sweetness to this beer. There is a light taste in between everything else that is slightly reminiscent of a light hint of caramel. However, it is not at all strong and is overpowered by the other notes at play in this one.

One note that follows through, but is strong here, is the grassy and vegetal note. There is a strong grassy and vegetal taste to this beer. It is quite powerful, and it asserts itself alongside the common sweetness and bready notes of the Kolsch.

The can is a simple hemp green coloured can. Big, bold white letters outlined with black spell out Harvest Moon on the front. Below that is a hemp leaf in behind a red maple leaf and in between two yellow maple leaves. Simplistic, which is generally what Nelson Brewing sticks to with their branding/labeling.

The carbonation of this beer is significant. It adds a crispness that helps to somewhat combat the sweet characteristics of the beer.

The head this beer pours is moderate. However, it dissipates rather quickly, but not completely.

There is zero lacing in this beer, pointing to the fact that there were very little hops used in this one. The glass is practically clean after finishing the beer.

The base of this beer is a fairly average Kolsch. It hides the sweet, bready, and yeast characteristics well enough, but is overpowered by the grassy and vegetal notes of the hemp used. This one could have gone for less hemp used.

You can also see all of the photos used in B.C. Beer Reviews, and some that do not make it into these articles, by following me on Instagram: nhendy5. And if you want to see more concise versions of these reviews up to 24 hours in advance, add me on Untappd: RedArmyNic.