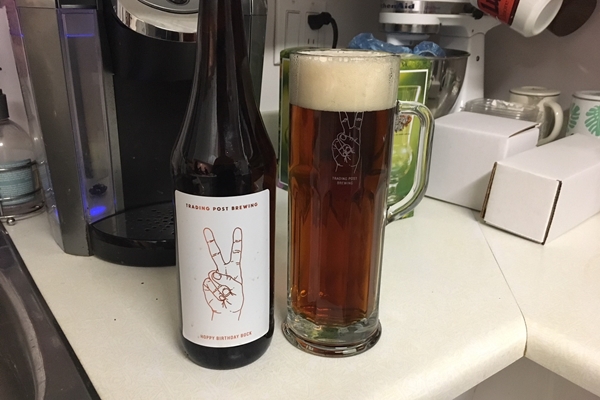 B.C. Beer Reviews is back to take a look at the second birthday beer release from Trading Post Brewing. Trading Post celebrated their successful first two years of serving great beer by releasing an interesting take to a Bock, adding a solid dosage of hops to it. A style not generally known for bitterness, this came out quite distinct from a traditional take.

A traditional German-style beer, the Bock is well-known for being a very sweet and malt-forward style of beer. While Trading Post certainly had that as the base of the beer, they decided to shake things up and add some very noticeable hop character.

Let’s see how the two-year birthday beer turned out.

This beer poured a medium brown from the bottle and the tap. When the glass is full it gets a nice dark brown in hue, hitting the style spot on here. Another note for this one is that the clarity was fantastic.

This one hits the nail on the head with the Bock style. The sweet and malty characteristic is the strongest note in this beer, but it is not at all overbearing. Very nice and smooth sweetness to the nose/aroma.

This beer, for those of you who have had the pleasure of smelling a mash in, smells just like the mashing process of brewing. It smells very fresh and lively, and the malty notes are very pleasant overall.

There is a light hoppy characteristic to this beer. It is certainly not a powerful note, and it is second fiddle to the malt/grain bill, but it is noticeably present in the background.

Not at all surprisingly, the malty character is the strongest note at play in this one. It adds the obvious sweetness that is typical of the style. Once again, it is not overbearing but is undeniably the strongest note.

As the name states, this is a very hoppy beer, especially for the style. This is quite easily the hoppiest Bock I have ever had. That being said, it is still extremely approachable for those of you who do not generally like more bitter beers.

The balance of the malty notes and the hops are very nice in this one. You get the full and smooth body of the style, and the hops come in and help to balance this very tasty beer. Trading Post went out on a limb here, and it worked.

The finish to this beer is fairly thin and dry. It is a nice note to compliment the hoppy notes and it helps to combat the malt/grain bill from becoming too strong.

The branding/labeling of this beer is simple, but it works. A clean white label is complimented with the outline of a hand doing a peace sign, which doubles as a way of symbolizing their second birthday. Simple and clean labeling/branding.

The head this beer pours is moderate. The retention of that head could be categorized as moderate as well. It does not last forever, but it is present for an amount of time that makes it noticeable.

The carbonation level is light, but that is a note for the style and it works well in this beer. The dry finish and hoppy notes are strong, so being more carbonated would take away from the balance and the malty notes that are the highlight of this style.

Definitely not a traditional take on the style, but it works. The base of the beer is a very tasty Bock, but the added hops give it a “new school” spin to appease the masses of hop heads out there. A nicely balanced and very tasty beer overall.