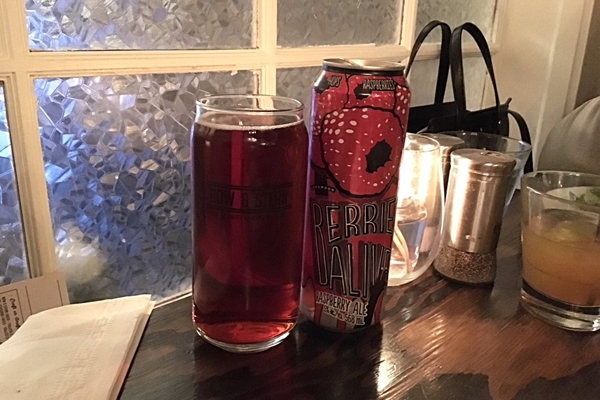 Spring is quickly approaching, and with that is going to come a gratuitous amount of berry-infused beers. Today’s B.C. Beer Reviews comes to you to take a look at the Berried Alive Raspberry Ale from Longwood Brewery out of Nanaimo. This is the opening of the floodgates, and a raspberry ale is a good way to start the season off.

The Longwood Brewery website describes the beer as such: “This beer is crafted by re-fermenting whole BC raspberries with a lightly hopped blonde ale to create a uniquely refreshing balance between tart and tasty. This light and refreshing ale is a great compliment to a hot summer day.”

Let’s dive into this fruit beer and see if it matches up to that tasty description.

This beer pours a light pinkish-red hue from the can that looks like raspberry juice. In the glass, it is a much deeper red colour that is spot on with what you would expect from a raspberry ale. The clarity is impressive as well.

The first note you get is the undeniably the strongest one present in this beer. The raspberries come through here fantastically. There is the sweet and somewhat tart notes you would expect to get from the raspberries used in the brewing process.

There is a very light and sweet scent from the base of the beer, which the label states is a blonde ale. The aroma from the malt/grain bill matches up with that of a typical blonde ale. It is sweet and smooth in the aroma. Balances well with the tartness you get from the raspberry.

This beer smells reminiscent of a tart raspberry jam. It would be fantastic for the summertime, and it is a very appealing nose/aroma overall.

The base beer being a blonde ale is less than surprising here. You get the subtle and smooth sweetness of a typical blonde ale from this one. There is a sweetness imparted from the malt/grain bill used.

This is definitely a sweet beer overall, but not to the point of being at all unpleasant. The body is thin enough to make sure this one is not overpoweringly sweet on your palate. This would be a fantastic beer for sitting on the porch on a sunny summertime day.

The can is perfect for the name. There are large raspberries cascading down from the top of the can with lettering at the bottom that looks like that of a horror movie. Very solid branding/labeling on this one.

The carbonation level is above average. It is not nearly enough to be categorized as biting, but it adds a crisp finish to this beer. This helps to combat the sweetness from the base beer and the raspberries added. A very nice complimentary note to this beer.

The head this beer pours is initially above average, but the retention of that head is nonexistent. It initially pours a fairly large head, maybe two finger widths or more, but it is gone just as quickly as it appears.

The body of the beer is rather thin overall, which matches up nicely with the crisp finish this beer offers. These are two nice notes to ensure that this beer does not become too sweet.

The raspberries are certainly noticeable throughout this beer. You get more of the tartness in the nose/aroma, and it is much sweeter in the tasting notes. A very smooth drinking beer, even when taking into account the level of sweetness in it. The crisp finish and thinner body help to make this a more balanced beer.

And if you want to see all of the photos featured in B.C. Beer Reviews, and even some that do not make it into these articles, you can follow me on Instagram: nhendy5. You can also see much more concise versions of these reviews up to 24 hours in advance by adding me on Untappd: RedArmyNic.