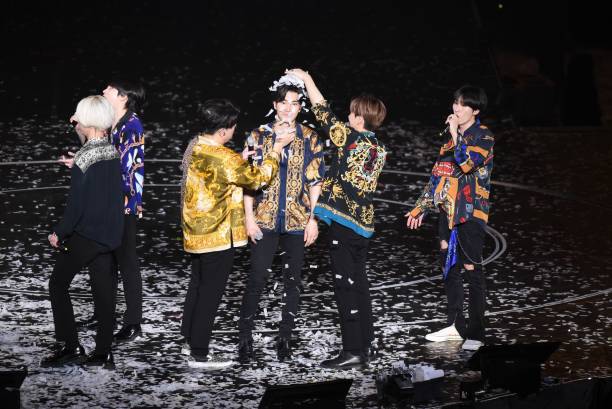 With the month slowly quieting down with releases, this week was a pretty small one in K-Pop. The biggest releases came from Super Junior, VIXX, and JBJ, with many minor releases from other artists. When you take the time to sift through everything, even in such a low-key week there are some hidden treasures.

Super Junior is back with a repackage of PLAY. The title track is “Lo Siento,” which features Leslie Grace covering the majority of the hook. I thought that the clash of the two musical styles made this song distinct and great. This collaboration is the type that you rarely see in K-Pop. The repackage also featured a couple of other new tracks. “Me & U” was my favorite out of the other songs on the album. Overall, this comeback album is a huge success for Super Junior.

This new song from the boy group VIXX has it all: it’s a high quality song with a great music video and choreography. There’s not much more you could really ask for.

Young Jun is back with 4.10 Mhz, his latest release. The title track “Don’t Leave Me” includes a music video that shows the production of his music in the studio. “Don’t Leave Me” was very slow, which a stark contrast to the rest of the songs on the album. The other songs also maintain a slow tempo, but manage to be a little livelier.

CUBISM is the latest album from SIYOON. This is one of those releases that isn’t a big deal in the North American k-pop market. The title track “Alone” is okay. The music video felt a little bland to me. The album’s standout track is “Single.”

Boy group The Rose has a new mini-album, Void. They had a release near the end of 2017, with “Like We Used To.” That song, as well as their other 2017 release, “sorry,” are included here. Title track “Baby” dropped with a music video, which, paired with the song, makes that the standout on this album; nothing else even comes close.

JBJ are back for one last release. After news broke last month that the group would be disbanding, they’re releasing NEW MOON. The lead single, “Call Your Name,” is a feel-good song that also manages to contain a hint of melancholy. I never got into this group, but “Call Your Name” seems like a good send-off for them. The album has many more songs, but a lot of them are from older projects.

Wheein, a member of SONAMOO, released a single titled “EASY.” This was a debut for her as a solo act. Sik-K features here, which I felt really mixes well with the song. I’ve never been big on rap interludes by features, but this one came off very smoothly. The song is good and groovy. The music video is good, but has a weird, nonsensical ending. Other than that, this was a strong release.

A music video was shot for “Peach” by Reddy. Apparently this had a whole album release, but I couldn’t track it down online. The chilled out song peels back the fourth wall in a studio-shot music video, with a low-point being the portion of the song performed by Suran.

In a pre-release single, Drunken Tiger put out the song “YET.” This fast paced, amazing rap song matched with a great beat was a good song. The music video was good, except for some slightly cheesy moments (for example, comets striking the earth). This was my first taste of Drunken Tiger ever, but it’s safe to say that I am very excited for what’s next.

Shin Yong Jae, a member of the group 4MEN put out his single “Today.” The song is very relaxing and calming, plus the music video that it came with is enjoyable. The video tells the emotional story of someone who is struggling with their job and their life, eventually finding success in the end.

YESEO released the single “Night Night.” This song is very good and unique in that it is fully in English.

Kim Taewoo – A Taste Of Spring

“A Taste Of Spring” is the title of Kim Taewoo’s latest release. It’s funny, because “A Taste Of Spring” is really what we got on the west part of the globe recently, as we had decent weather, then a delayed rush of snow, ice and rain. But back to the topic at hand, this song is decent, but nothing exceptional.

H.U.B – When A Blossom Day Of Cherry Blossom

Oh boy. It’s another one of those releases. If you read last week’s roundup, you might remember the cheap BADKIZ video that was featured. This is similar, but worse. The song quality is very low. There’s a good song somewhere here, but it’s buried under terrible production quality that makes it sound like a low quality YouTube video from 2008. Also, the video itself is very cheap looking, which further hampers enjoyment of the song.

Now, I’ve never heard a song from IMFACT before (after listening to this, I now know that’s a bad thing), but this song was amazing. It felt like it grabbed influence from Drum And Bass. The video also features them holding a cute cat, which is a nice added bonus.

This song got no attention at all, but it’s very cute. The video is adorable, and the song itself is pretty good. It’s slightly cliche, but I was a sucker for it.

That wraps up this week’s roundup! It was slower than the last couple of weeks have been, but there was still plenty here to enjoy. Come back next week for more!