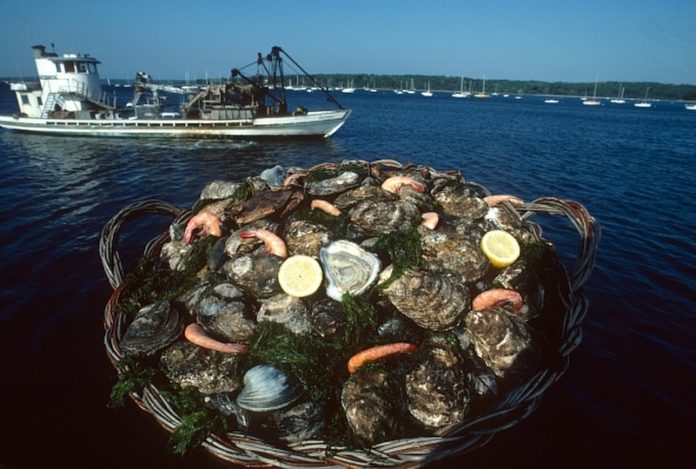 Anyone who knows me knows that I love oysters more than just about anything consumable in the world. Put me on a deserted island with oysters and champagne and I’ll be as happy as a clam. In fact, just give me the champagne—I could probably hunt down some good shells out there myself! So when my good friend Mike texted to see if I was interested in trekking out to Connecticut for the Milford Oyster Festival, you can imagine I accepted his invitation with no hesitation. A good southern belle never turns down an opportunity for some fresh shellfish. I was sold.

This particular area of Connecticut was foreign to me. Catching up on some reading outside the train station, I had many questions. What would this little town have to offer, not so far from the concrete jungle of Manhattan?

The Milford Oyster Festival – A Harvest of Summer Flavors

Not Just Another Seaside Town

Milford is a special place. Comparable to many seaside towns of New England, it features traditional colonial architecture with ornate columns and decorative rooftops. Underneath and within these structures exist various traditional establishments. There are libraries with almost ancient card catalogs, where books are sorted and located with ISBNs and index cards to assist readers with their curiosities because they haven’t quite upgraded to digital systems. There are formal restaurants and tacky diners that have been around for decades and employ the few old-time citizens, who know their way around the town blindfolded.

There are also bars. Newer bars, contrived and orchestrated by the town’s youth who are passionate about building careers that benefit their homestead. There are also breweries, such as Tribus Beer Co and Two Roads Brewing Company, and lots of local digs for good fresh seafood specialties that have their own flavors incomparable to those that can be found on the Cape, in Newport, or Cohasset. The offerings are no better or no worse than its New England waterfront neighbors, but the flavor of the town is different, as are the flavors of their oysters.

Claiming the largest variety of oysters at any festival of its sort in the USA, Milford’s was voted the best food festival in Connecticut. It features craft beer from local breweries as well as national favorites, as well as premium wine (Josh Cellars did a fabulous wine tasting).

The festival also brings in a large craft fair, where patrons can purchase art and goods from local artisans and craftsman and have their faces adorned with painted butterflies and jungle animals. Another summery treat is the array of carnival rides, including one of those crazy gravity wheels, a Ferris wheel, and aerial-carousel rides.

Of course, all of this is experienced with the auditory sensation of live music, such as local favorite Kevin Yuliawan, John Cafferty & The Beaver Brown Band, and headliner Eddie Money.

All the Good Eats

21 varieties from 8 different states on the East Coast, AND clams, AND lobster rolls, crab cakes, and street food? Of course, I couldn’t try everything. That said, I gave it my best shot.

Based on the day’s heat, I had to eat something filling first. I started with a crab cake sandwich, which could not have been fresher. Served on a potato roll with a side packet of tartar sauce, it was light, and simple in flavor, but delicious.

And then, it was straight to the shells. Thankfully, we arrived early enough to experience several of the variants. My priority is always to go as local as possible to start. Both Milford offerings that I sampled had high salinity. One was larger and meatier than the other. Both were absolutely delicious. I also tasted several oysters from New England neighbor towns.

Whether you consider yourself a seasoned oyster aficionado or you’re new to the culture, oyster festivals are a great opportunity to experience a wide variety of offerings and develop your palate. The Milford Oyster Festival, similarly to many of its kind, is a fantastic introduction to oysters and the experience of tasting them. And, there’s the bonus accompaniment of delicious local brews and background tuneage. The more experienced oyster consumer might miss the opportunity to learn about each oyster. Still, that does not diminish the experience of sampling the variants to discover one’s tastes.

In the coming weeks, I’m excited to bring a set of articles to the site on the arts of tasting and harvesting oysters, so do stay tuned for those!