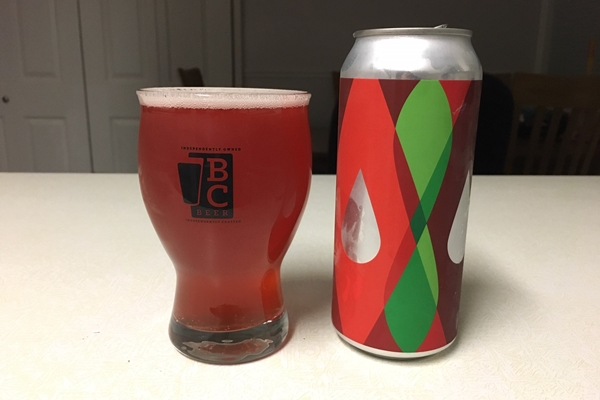 There are very few things quite like some nice raspberry jam on a piece of toast. Four Winds Brewing has tapped into that by putting it into liquid form in their Raspberry Jam IPA. B.C. Beer Reviews is here to crack open this can of interesting brew.

Pours a pinkish-red colour from the can and is relatively clear. In the glass, it retains the slight clarity, albeit less than what you would expect from the pour. It is also a bit deeper red, just like raspberry jam.

There is a lightly sweet aromatic to this beer, which is undoubtedly a byproduct of the use of both lactose and vanilla. This is followed up by the unmistakable aromatic of raspberries that adds a subtle tartness to the aroma.

These are pretty well all the notes that you could get from this beer, with no off aromas and no real way of telling if the Mosaic lupulin powder gave off anything. It is a very tasty smelling brew overall.

You get a smoothness on your palate at first that is complimented by a light touch of vanilla. After that, you start to get the raspberry with a very light touch of tartness that fades away rather quickly.

While it is still delicious, this beer smells more like raspberry jam than it tastes, which is perfectly okay for an IPA.

You get a moderately bitter backbone to this beer in the finish. It is not enough to take away from the other notes, rather it adds another dimension that any hop head is sure to enjoy.

The branding is, as is always the case from Four Winds Brewing, a beautiful piece of art. Rounded designs of purple, green, red and silver make for a very eye-catching and pleasant can.

This beer does not have much of a head overall. The retention of that head is above average.

There are thick patches of lacing on the glass from this beer. It would be interesting to see if lupulin powder can create such thick lacing as opposed to pellet or whole cone hops.

This beer definitely stays true to its namesake. The aroma is pretty well straight raspberry jam with a light touch of vanilla. It is similar in the taste, but much less potent and it also presents you with a moderate bitterness.