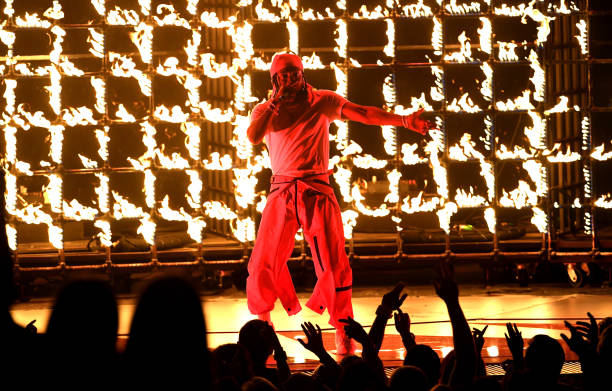 Three nights after cleaning up at the MTV Video Music Awards (VMA’s), Kendrick Lamar brought his fire performances to Nashville’s Bridgestone Arena. 5.4 million viewers tuned into the 2017 VMA’s, where Lamar opened up the show with a combo of his big hits “DNA” and “Humble” from DAMN. Lamar took home six Moon Man awards from the event, including Best Video, Best Cinematography, and Best Visual Effects. Nashville pulls big hip-hop names, hosting Drake, Kanye, Beyoncé, Rihanna, but this was my first major hip-hop act in my hometown. I’ve caught some of them in major cities (Miami, New York City, Vegas) nightclubs and on the festival scene but it was a special opportunity to see one of the best light up Nashville. The latest Kendrick Lamar tour, DAMN, provided an indelible and passionate performance the growing city won’t soon forget.

As the city of Nashville grows, supporting a hip-hop act of this magnitude is an incredible achievement to observe coming to fruition. The Country Music Capital of the World playing host to the hottest rapper in the business; think about that for a second. A man who isn’t afraid to talk politics and larger issues walking into a town full of country artists, often too concerned with their album sales to speak up. The irony was pervasive, but inviting and a welcome breath of air to the status quo.

There were some lower level seats available for $40 in the hour before the show, so if you missed out it’s definitely on you.

D.R.A.M. and YG were capable openers with no real surprises; solid. Broccoli was a crowd favorite, go figure. The atmosphere at that moment was devolving to, well, less than enjoyable smoke. The crowd was evolving into a rowdy and expressive crew thanks to the emphatic language and tone YG used.

Then, it was time for the main show. Time for Kung Fu Kenny, K-Dot, Kendrick Lamar. The Chicago-born, Compton-raised rapper brought the hype to life in an hour and a half set.The passion and fury the main show brought only fueled the crowd’s excitement, creating a different Nashville atmosphere. The incident was no mere country concert. DAMN has four non-consecutive weeks at number one on Billboard’s 200 Chart to date, and Lamar’s performance only emphasized how many fans have enjoyed his latest work.

The show opened with a Kung Fu Kenny-theme, with Lamar fighting off a choreographed ninja on stage with his potent lyrics from “DNA.” For those who may not know, Kung Fu Kenny is a Lamar alias referencing Don Cheadle’s character in “Rush Hour 2.”

“King Kunta” and “Swimming Pools” came in the first half of the set, pleasing longtime fans. Those songs provided a nostalgic atmosphere, but also proved that Lamar’s older songs still boast lyrical power.

Lamar’s third album to top the chart (To Pimp a Butterfly – 2015, Untitled Unmastered – 2016) actually had all fourteen songs in the Hot 100 simultaneously. He performed eight of them for the Nashville crowd, cementing his legend in the hip-hop community.

Pyro fans were salivating with K-Dot’s stage. Flames burst throughout the show, creating a well choreographed atmosphere with the lyrical power. At one point, a 15-foot platform rose for K-Dot. He stood upon it, alluding to the chess mastery of a rap battle, and won over the crowd with the gaudy stage setting and emphatic lyrics.

Kung Fu Kenny closed with “Humble” TWICE, letting the crowd take the lead the first time through before asserting himself the second time around. It was an excellent finish to his performance. The crowd involvement allowed served as a “thank-you” to the energetic fan base, and established a fun precedent for future Kendrick Lamar tour venues.

In my experience, more lyrically intricate rappers like Lamar are rough live performers; however, the night certainly proved Kung Fu Kenny is a Judan in-venue. Sporting his orange prison jumpsuit, Lamar delivered fluidly and lit Bridgestone Arena up all night.

The fan involvement and energy fueled Lamar all-night long, keeping him going when he could have simply been ‘good-enough’. Lamar proved that his new albums are as passionate as his old, as well as establishing that his foundational albums still live up to the creativity he know boasts. Nashville was unforgettable, and any fan of the Kendrick Lamar tour system should make their way to witness the lyrical mastery in-person.