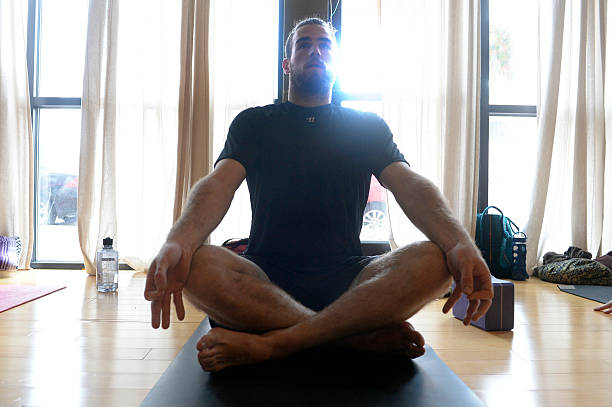 Some years ago, it seemed every other athlete was taking ballet lessons. After all, dance is all about finding your core, your rhythm, and your focus. In recent years, yoga has taken over the role of dance, and has gained momentum among elite level athletes. In some cases, yoga routines have been developed for a specific slot on the team. E.g. there is now an ever increasing number of hockey goalies who supplement their training with “goalie yoga”. Our entire Western way of thinking is very results based.  In yoga, however, there is no requirement to perform or deliver. How does that jive with hockey, or football? To find out more, I checked in with Maria Hegg, proprietor of Yoga Stark in Örebro, Sweden. Hegg started working with goaltenders from a Swedish Hockey League team in 2013. Since then, she has become a Goalie Yoga Guru with an extensive resume.

Checking in with the Goalie Yoga Guru

Yoga is a form of energy management, with the goal of mastering your energy instead of wasting it. Through the practice of it, the mind, body and breath become one – they unite in the practice of connection. “Our strength is greater than the sum of our muscles. Yoga helps put all these parts together in a balanced body,” says Hegg. In yoga, she explains, the “mind, body, and breath move as one, just like a large body of water. The absence of thought is like the absence of wind, allowing the water to become very still.” Yoga is also a practice of focus and concentration, which makes it great for mental training. It keeps your mind sharp. And at the end of the day, yoga is different from a hockey player’s regular off ice routine. Tossing it up often translates to fun.

From Hatha Yoga to Goalie Yoga

When Hegg first started working with the local SHL team, they had three pro goalies. ”That was the start of the development of goalie specific yoga” says Hegg. From that point on, she was like a dog with a bone, taking every opportunity to learn more. While an already accomplished yoga instructor, she now sought specific insights into the goalie position. E.g. she sought out meetings with Washington Capitals goalie coach Mitch Korn, and Swedish goalie coach Thomas Magnusson. Previously, Hegg had been a Hatha Yoga instructor for us mere mortals. She felt that the style lends itself very well to goalie specific yoga training. With her newfound knowledge in hand, Hegg was able to adapt her teaching style to the general and individual needs of goalies. “It’s functionality over difficulty, which often can be experienced with the postures and sequences in ‘regular’ yoga classes” says Hegg.

Taking it a Step Farther

What is it about yoga that makes it such a great exercise tool for goalies? According to Hegg, “goalies need an incredible amount of both stability and mobility. In a lot of training you train those qualities separately with strength work and then stretching. Yoga can offer both at the same time.” Additionally, yoga has been scientifically proven to have positive effects on the nervous system. Simply put, practicing yoga leads to a decrease in recovery time after tension. “As the practice incorporates breath work, relaxation and restoration, as well as more physically demanding aspects, making it suitable for rehabilitation and recovery,” says Hegg.  “This is a very balanced way of developing both strength and mobility. Hence it’s also good prehab. “ Yoga is a practice of balance, and should always be adjusted to individual needs. Making it specific to a slot is just taking that adjustment one step farther.

While it is not a substitute for strength training, goalie yoga can be very useful to add to the regular off-ice training routine. Similar workout routines are now being brought forwards for other slots, and for other sports. NFL players who have turned to yoga as a way to manage injuries include Keith Mitchell and Wesley Woodyard. Victor Cruz, Vernon Davis and Ray Lewis turn to yoga to stay sharp and in shape. Nate Lawrie and Derrick Townsel have even created their own yoga related businesses. In the meantime, yoga is also spreading among soccer players looking to improve flexibility and stamina. The Dharma Yoga wheel, yoga mats, and foam rollers have become standard equipment in most North American gyms. And rightfully so – we all know a weekend warrior who could use a good dose of balance, focus and flexibility! And with yoga diet tips, you can provide your body with the fuel you need to succeed.