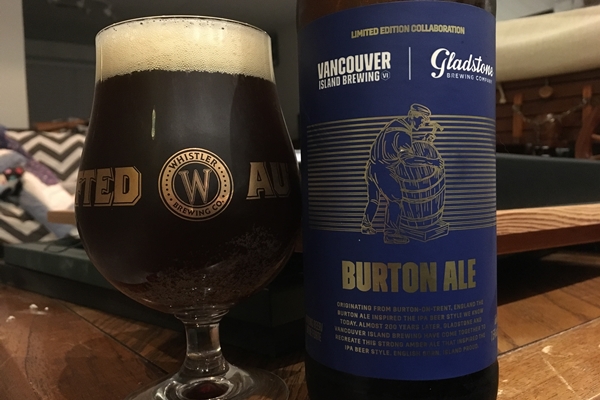 In this edition of B.C. Beer Reviews we will be taking a look at the first collaboration beer of the series. This is the Burton Ale that Vancouver Island Brewing collaborated with Gladstone Brewing Company of Courtenay, British Columbia.

To give you a better idea of what a Burton Ale is, in case you have never had one, the bottle has a good description. Per the bottle: “Originating from Burton-on-Trent, England, the Burton Ale inspired the IPA style we know today… Gladstone and Vancouver Island Brewing have come together to recreate this strong amber ale that inspired the IPA beer style.”

Expectations coming into this were that the beer would obviously be bitter, that goes without saying. Another is that the colour would be an amber or golden hue. Let’s take a look at if my assumptions were correct or not.

The colour of this beer poured a dark amber. You would expect it to stay as light in the glass, but that wasn’t the case.

The colour when poured fully into the glass was a very dark brown. The hue of it, in any light, actually was reminiscent of a dark dirt colour. While this doesn’t sound overly appetizing, the beer improved from there.

The first thing that needs to be said about this is that the malt characteristics absolutel dominate the aroma of this beer. If that isn’t for you, then the nose/aroma of this beer won’t be up your alley.

While the malt in the nose is the dominant characteristic, it isn’t the only thing showing up. There is a very light, very subdued scent of the hoppy bitterness that is to be expected from this old school style.

This is where the beer threw a bit of a curveball. The malts you would expect to smack you in the face, based off the nose/aroma of the beer, was not overpowering.

The main tasting note was the hoppy, mouth-coating bitterness of the beer. This is one of the types of beer that you take a drink of and it sticks with you long after. While this can be a positive thing if you like your beers with a resinous characteristic, you almost need to cleanse your palate before moving on to another beer to truly appreciate the next one.

The other notes, although very much in the background, were hints of molasses and a boozy taste. Neither of them were at the forefront, and the molasses started to show up a bit more towards the end of the bottle when the beer was slightly warmer.

Another note that started to increase with the warmth of the beer was the malt characteristics. It was a simple taste, but it started to mirror the nose/aroma later on in drinking this one.

Something you would expect to see with a beer that sticks to your mouth like this is lacing. There was a bit of lacing at the top of the glass, but it significantly dissipated as the beer got lower.

Another thing of note was the head retention. The head on the beer was a nice one, even without a meticulous pour. The retention of said head was decent, at best. There wasn’t anything of note here.

The last note that stuck out was the carbonation. It was a lightly carbonated beer, but there was still enough to add a nice crispness to it.

For the first time having a beer categorized as a Burton Ale, this was an interesting way to open the door to a very old style. While it isn’t something that I would necessary seek out again, it wasn’t at all a bad beer.

Want to see all the pictures of the beers for B.C. Beer Reviews? Follow me on Instagram: nhendy5. You can also add me on Untappd to see my more concise reviews up to 24 hours before B.C. Beer Reviews comes out: RedArmyNic

And as we get closer to the holiday season, we change our focus on to giving to others. If this is something you want to start early, head over to bccraftbreweries Instagram profile for information on donating to families in need of monetary help. You can win prize packs from over a dozen craft breweries in British Columbia.