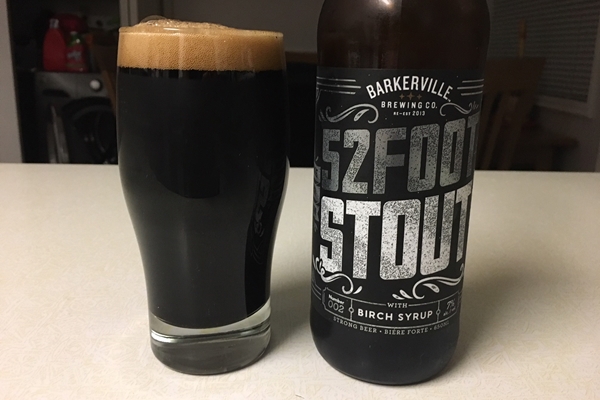 Welcome back to B.C. Beer Reviews. For this edition we will be taking a look at another dark beer well-suited for the cold weather. This one comes from Barkerville Brewing out of Quesnel, British Columbia.

The 52 Foot Stout from Barkerville Brewing is another award winning beer being featured here in B.C. Beer Reviews. This black and heavy beer won first place for British Stouts at the 2016 BC Beer Awards.

While this should come as no surprise to anyone that has had it, it is a testament to how tasty of a beer this is. And to categorize it as a very nice cold weather beer is spot on.

Surprisingly enough, this is the only stout in rotation for Barkerville Brewing.

There is really only one thing you can say about this beer: It is black as night. The beer pours the same colour as it looks in the glass. There is really no other way to say it, and that’s that this beer is about as dark as they come in colour.

The first thing that you get when taking a sniff of this beer is the coffee notes. These are undoubtedly at the forefront, and they are pretty well the only smelling note you get at first. They are very strong, and very pleasant.

Although the coffee notes are strong, the malty aromas shine through on the back end and compliment the coffee quite well. There is a sweetness to the nose, probably due to the malt characteristics, and it makes for some tasty aromas.

The tasting notes really do follow suit with the nose/aroma in this beer.

The first taste follows suit with the nose/aroma, and that is the strong coffee notes you get. They are complimented with a nice roasty taste, and the back end of each drink has the bittersweet finish you would get with high quality coffee.

The roast from the malt characteristics works perfectly for this pitch black beer.

Another thing that may just catch your eye is that on the bottle it says it is made with Boreal Birch Syrup. Birch syrup is supposed to impart flavours of honey, caramel and even add a bit of spice to flavours.

You certainly do not get any honey sweetness of the beer. You can somewhat get trace hints of caramel, but that surely have to be thought of before you can notice them over the roasted flavours. As for the spice birch syrup can impart, you can definitely get a bit of that on the back of your palate in the aftertaste, but it certainly isn’t overpowering.

This is the type of beer you want to have a hard pour on. With a hard pour you good a pretty nice head to this beer. The head retention is decent, but not fantastic. It lasts long enough to be noticed, and then it’s gone.

Another thing of note with this beer is the mouthfeel. While you would think from the nose/aroma and the taste that it is going to be a thick, heavy beer, it isn’t. It is surprisingly smooth drinking for such a dark beer, and the finish is nice and crisp.

The labeling on the bomber bottles is simple. It has an old school meets new school look to it. The border and writing is reminiscent of an old school Western style look, with a new school touch to it. It is very appealing. While it isn’t going to win any awards for branding, it is still pretty sharp.

Want to see all of the pictures used for B.C. Beer Reviews, and even some that don’t make it into the articles? Follow me on Instagram: nhendy5. You can also get much more concise reviews of all the beers I enjoy throughout the week on Untappd, as well as seeing my reviews here up to 24 hours in advance: RedArmyNic

The colour of this beer is spot on with the style: dark. The nose/aroma and tasting notes go hand-in-hand with each other, offering no surprises, but are quite enjoyable. The birch syrup is a nice touch, even if it is only imparting slight tastes. Overall a very good beer.