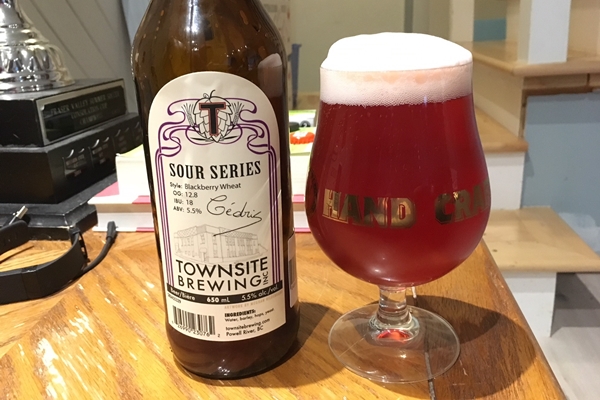 This edition of B.C. Beer Reviews comes to you with two firsts in this series: Townsite Brewing and a sour beer. This one is part of Townsite’s ‘Sour Series’ that features other like a sour saison, a sour belgian ale and this one.

Townsite is located in Powell River, British Columbia and has a pretty darn varied lineup of beers. Porters, Pale Ales, Sours, Stouts, Saisons and everything in between. If you are looking for a B.C. brewery that does it all (almost), look no further.

Let’s take a look at their Blackberry Wheat Sour.

The colour is as you would expect it to be, purple. The dark purple looks exactly the hue of the blackberries used in this beer.

It is a pleasant and inviting colour for those of you out there who love their sour beers.

The nose/aroma of this beer throws a bit of a curveball at first. As this is categorized as a wheat beer, the nose/aroma follows suit with that style. You truly get the wheat full on.

As for the other notes in the nose/aroma, they are really hard to catch. This beer hides its sour characteristics in the nose quite well. The slight scent of a blackberry hits you briefly, but it is gone just as soon as you catch it.

As is stated above in the nose/aroma, this beer hides this from you, until you take the first sip. This is a lip puckering, almost jaw clenching level of sour in this beer. If you love that sort of stuff, this is truly a beer worth trying.

If you are not a person who likes to make the faces a really sour beer can make, steer clear. This one packs a wallop of it.

Aside from the very obvious sour notes that dominant the taste of this beer, it is actually quite tasty and complex.

The taste of the blackberries are ever-present and they add a level of sweetness that somewhat helps to combat the sour. Despite their sweetness, this is still a very, very sour beer.

As for the beer as a wheat ale, it is pretty well spot on. It has the nice subtle notes of the wheat and a dry body overall that allows the blackberries and sour notes to dominate this one.

If Townsite was going for a really sour beer, which one would assume they obviously were, picking a wheat ale for this one was a very good choice. Overall a very refreshing beer for the sour lovers.

The labeling is simplistic, but slick in its own way. The original gravity (12.8), IBU (18) and the ABV (5.5%) are listed front and center. So for those of you that like information on there beer, there is a least a base level of it on the bottle itself.

As for the hops used in this beer, it is very hard to put a finger on any characteristics that they may have imparted on this beer, if any. They are not listed on the bottle, so without confirmation it is hard to pinpoint what they used.

This beer, upon first pour, foams up quite a bit. Luckily enough, the head retention isn’t ridiculous and you are able to top off your beer in short order. Let it be known that this was even with a very meticulous pour.

The colour of this beer matches the blackberries used, and it is very inviting. The best thing about this beer is that it is a surprise to those who drink it. The sour characteristics are masked almost entirely in the nose/aroma, but certainly not the taste.

As said above, if you like sour beers, this is one to try. It is a well done beer, and for those of us that are partial to mouth puckering beers here and there it is a good way to change things up a bit.

Want to check out all of the beer photos on my posts, and even some that don’t make it into these articles? Follow me on Instagram to see them: nhendy5. You can also add me on Untappd to see all the beers I drink and all of the beers in B.C. Beer Reviews up to 24 hours in advance: RedArmyNic.