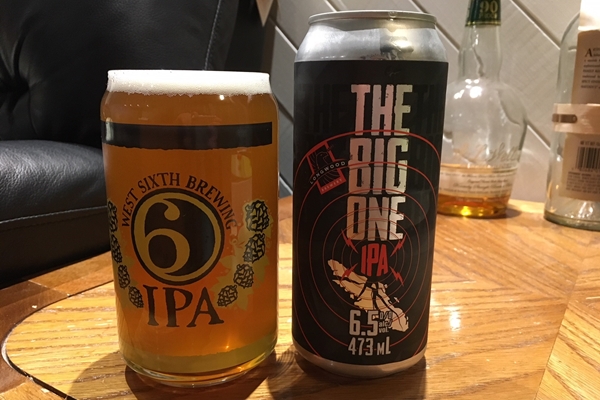 B.C. Beer Reviews is back to take a look at a first time entry, Longwood Brewery and their staple IPA affectionately named The Big One. Their website states that all the hops and grains used in this one are from Vancouver Island, a cool fact seeing as they are from Nanaimo, British Columbia.

Longwood Brewery classifies this as an English IPA. The Centennial hops used in this beer are used to add a note of citrus. The Willamette hops, however, are a hop generally associated with English beer styles.

Unsurprisingly, this beer fits the characteristics of the style, and the Centennial and Willamette hops do their job. Let’s take a look at how this one turned out.

The traditional colour of an IPA. A yellowish golden hue in both the pour and when the glass is full. Nothing over the top or out of the ordinary, and certainly spot on with the respective style.

The malt/grain bill is very obviously present in the nose/aroma of this beer. It has the mild sweet characteristics that point to this. This generally isn’t a bad thing, but you would hop the hop profile would make an appearance first.

Overall, this is an okay nose/aroma. The grain bill dominates the nose. It would certainly be nice to smell a bit more of the Centennial hops in this one, meaning more citrus in the nose to match up more with West Coast styles.

The tasting notes truly do fall in line with the nose/aroma. The first taste you get is the subtle sweetness of the malts/grain bill. This is within the expectations of the style, but it would be nice if it was more hop-forward in its tasting notes.

After the sweetness from the grains passes you get a bit of the earthy and spicy notes from the Willamette hops. This is, however, much on the back end of you palate. It matches up more with the beer style than the first taste.

There is a very, very subtle citrus not to this one as well. It is very difficult to pinpoint exactly how much, but it is there if you really pay attention.

Despite the hop notes being overshadowed by the grain bill, they do stick on your palate well after each drink. This brings it much closer to the respective style.

This beer was poured with a less than meticulous pour. A small head was produced, but with very little retention of the head. That is not overly surprising, especially given the style.

There is a rather significant amount of lacing on the glass with this one. You would think that, with the amount of lacing, that there might be a bit more of a resinous hoppy character in the nose/aroma and tasting notes, but there really isn’t.

The labeling is pretty nice. It is a matte black background with rather simple artwork. Nothing special, but there is certainly worse branding/labeling out there in the B.C. craft beer market.

The nose/aroma is predominantly malt/grain-forward, with very little hop characteristics but the spicy and earthy notes on the back end. The tasting notes follow suit, with the characteristics of the Willamette hops being much more noticeable than that of the Centennial that was used in The Big One.

It is, by no means, a bad beer. This one is certainly not going to win any awards in the province or nationwide, but there are also much worse IPAs currently on the market. That is about as complimentary as it gets for this one.

In short, it is a simple, old school, malt/grain-forward beer with a backbone of bitterness with no noticeable hop notes.