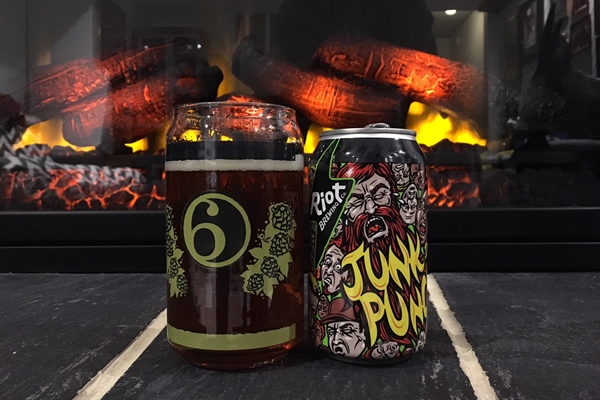 B.C. Beer Reviews is back this week to take a look at the Junk Punch IPA from Riot Brewing. Riot is a relatively new brewery, but they are already making name for themselves in the B.C. craft beer scene.

Their beers have been well received and their in your face, punk rock style labeling has made them all the more noticeable.

Aside from the bright, colourful and interesting labeling on their products, they have some interesting names. Along with that, they use some very popular hops in Horizon, Mosaic, Cascade and Dr. Rudi. Let’s take a look at the Junk Punch IPA.

This beer pours a deep amber and almost copper colour. It is a bit lighter in the pour than when it is in the glass. Definitely what you would expect to see from a typical IPA.

You definitely catch some citrus and almost tropical fruit notes behind the floral characteristic. These compliment the first notes nicely. It makes for a much less intimidating nose/aroma overall.

These citrus and tropical notes are almost certainly a product of the Cascade and Mosaic hops used in this beer.

There is very little to no malt characteristic in the nose/aroma. Overall an enticing nose/aroma for those of you who enjoy bitter beers.

You get the bitterness of a typical IPA right off the bat. It is certainly not as bitter as you might expect from the nose/aroma but definitely does not shy away from the IBUs in it.

The resinous note that you smell at first does not follow into the tasting notes. It is a clean-drinking IPA that slides right off the back of your palate. Makes it significantly more sessionable than some other palate-wrecking bitter beers.

There are light notes of citrus and fruit, much like in the nose/aroma. They are subtle and are definitely a background note in this beer.

The branding/labeling is in your face and eye-catching. Bright, vibrant colours are complimented by the males faces that all look to be in serious discomfort. Hence the name Junk Punch. Punk rock-ish labeling, and it certainly sticks out in a good way.

Even when poured semi-hard there is only a moderate head to this beer. The retention of that head is also minimal. It does not stick around for long.

There is a rather light level of carbonation in this beer. There is enough to make the finish a bit crisper, and it also helps to have this beer finish dry. This beer does not coat your palate with bitterness like some IPAs can. Thumbs up in this regard.

The nose/aroma is a nice one for a typical IPA. The floral and “bitter” notes are balanced nicely with the citrus and tropical fruit notes you get. It certainly makes for an inviting aroma for bitter beer lovers.

The tasting notes pretty well follow suit with the nose/aroma, offering no surprises in this department. A clean-drinking and well-done IPA. The fact that the bitterness does not linger on your palate for long makes it easier to have more than one of these at a time and still have the ability to taste other beers.

You can also see all of the photos featured in B.C. Beer Reviews, and even some that do not make it into these articles, by following me on Instagram: nhendy5. And you can see much more concise versions of these reviews up to 24 hours in advance by adding me on Untappd: RedArmyNic