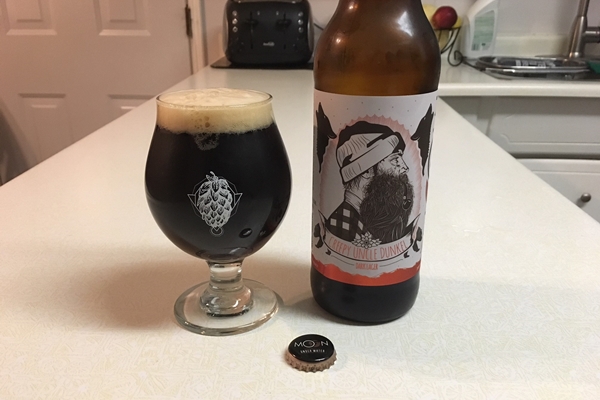 In today’s edition of B.C. Beer Reviews, we will be taking a look at the first every entry from Moon Under Water, their Creep Uncle Dunkel. Categorized as a Munich Dunkel/Dark Lager, this beer exhibits a lot of the normal characteristics of a German-style beer.

When seeing on the label that it is a Dark Lager, and also categorized as a Munich Dunkel, you go in expecting a very malt-forward beer. The note to pay attention to is whether they can balance that sweetness to not be too overpowering on your palate.

Let’s see how they did in this one.

Pours a very dark brown that you would expect from a Dunkel from the bottle. Very dark in the glass, but nowhere near being black or impossible to see a hue. When put against the light it is a very dark brown. Definitely hits the style notes here.

You get the typical notes of a lager beer here. It is a somewhat sweet and smooth aroma to this one. The malt/grain bill is undeniably the strongest note at play here, which is a good thing and matches up well with a traditional Dunkel.

The notes of the darker malts come out nicely in this one. There is a light caramelized sugar scent to it that is common for darker malts and grains to impart on a beer. Once again, a common note for this style.

In regards to the sweet notes, this is a relatively complex beer with the malt/grain bill used. However, outside of the malts and grains, there is not a ton of complexity to this beer.

There is no hop presence in this nose/aroma, which is okay for the style. Fairly one-dimensional in that respect, but still a very tasty nose/aroma overall, especially for those of you who love their German-style beers.

The caramelized sugar scent follows into the tasting notes. It is sweet and certainly present throughout. This plays well with the other sweet notes imparted by the malts and grains used in this beer.

To combat the sweet notes, in a good way, this beer has a rather dry finish overall. It could not be categorized as crisp or even remotely astringent in any way, but rather a nice note to combat the beer from being overpoweringly sweet.

Like in the nose/aroma, there is virtually no hop presence in the tasting notes of this beer. There is a very light note of hop bitterness in the back end of your palate, but it gets overpowered by everything else this beer brings to the table.

This beer screams Oktoberfest. It would fit in perfectly with the rest of the German-style beers on display during the fall.

The branding/labeling is sharp. Just as the name Creepy Uncle Dunkel states, there is a bearded man in flannel with a pipe hanging from the corner of his less than visible mouth. He looks to have spent a good deal of time living alone in the woods. Some flashy lettering and a shiny bottom border with some hipster-ish graphics turn this into a rather appealing label.

There is a fairly distinct mouthfeel to this beer. Despite having a dry finish, it has a smooth and rather full body to it. This is common to the style, and it is less than surprising to encounter with such a malt-forward beer.

The head this beer pours is above average. The retention of that head is equally as impressive, sticking around long after you pour the beer from the bottle.

The carbonation level is typical of a lager-style beer. Light and somewhat crisp, but not enough to make a significant difference to the beer overall.

This beer, as stated above, would fit into an Oktoberfest line-up nicely. A sweet, malt-forward beer that is balanced out nicely with a drier finish. The lack of hop presence matches the style, and this makes for a nice beer for colder weather and would pair nicely with some sauerkraut and sausage.

You can also see all of the photos featured in B.C. Beer Reviews, and even some that do not make it into these articles, by following me on Instagram: nhendy5. And if you want to see more concise versions of these reviews up to 24 hours in advance, add me on Untappd: RedArmyNic.