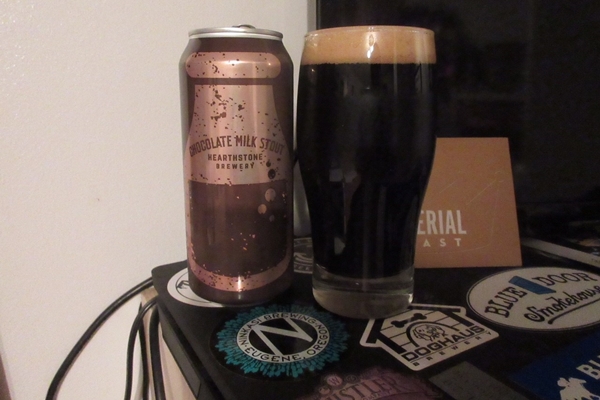 In today’s edition of B.C. Beer Reviews, we venture to North Vancouver to try the Chocolate Milk Stout from Hearthstone Brewery. This style is expected to be creamy, sweet, and smooth from start to finish. This matches up well with the interesting beers that Hearthstone continues to put out.

The Milk Stout is a smooth and creamy style that has a significant body and creamy finish to it. The lactose plays a leading role, and the addition of chocolate from Hearthstone Brewery is a very smart take on a relatively newer style of beer.

Let’s see is Hearthstone hit the nail on the head with this one.

This beer pours a deep brown from the can, but certainly not the darkest beer ever. A very, very dark brown when the glass is full. You can tell it is more of a dark brown than black when holding it up to the light. Nonetheless, virtually impossible to see through this one at all.

The first note you get from this one is the creamy milk aroma that you get from a beer that is brewed with lactose. It has a sweet and creamy aroma that matches up well with it being labeled a chocolate milk stout.

The aroma behind that, but just slightly so, is a nice chocolate aroma from the malt/grain bill. There is also a very light aroma of coffee bean, but the chocolate aroma is certainly much more noticeable than that.

When calling this one a chocolate milk stout, the nose/aroma matches up well with the name. Very sweet, a definite creamy note from the lactose, and a strong aroma of chocolate.

Overall, this is a very sweet smelling and tasty nose/aroma. Well done in the nose/aroma.

The first note you get is undeniably the chocolate note imparted by the malt/grain bill. It is stronger in the taste than it is in the nose/aroma, but only slightly. It is a very pleasant level of chocolate taste in this beer.

The creamy and smooth notes you expect to get from the lactose falter in the taste and in the mouthfeel. This beer has a very slight sweetness from the lactose, but it is nowhere near what you would have expected from the nose/aroma. On top of that, the body is not nearly as creamy as you would expect either.

The slight coffee note you get in the nose/aroma is still present, but it is very much in the background. Noticeable, but not a front-runner in the tasting notes for this beer.

Overall, not as tasty as the nose/aroma puts off, but certainly still a very well done stout and the chocolate notes come through nicely.

A brown label that is the colour of chocolate milk has a slightly lighter brown shade of an old school milk glass. Fairly simple labeling/branding overall. Hits the spot for what the beer from Hearthstone Brewery is trying to accomplish.

The head this beer pours is initially above average. It pours a fairly solid head that has a slight tan hue to it. However, the retention of the head is well below average. It dissipates rather quickly.

The carbonation level is fairly noticeable. There is a crispness to the finish of this beer that you would not generally expect from a milk stout. It is not necessarily a bad thing, but it does not match up with the general guidelines of the style.

The body of this beer is moderately thin. It definitely does not have the creamy thickness that you would associate with the style. Comes off more as an Irish Stout or a Dry Stout more than a milk stout.

The nose/aroma is undeniably the best part of this beer. The aromas match up perfecty with the milk stout, and they have a nice and strong level of chocolate. Where it falters is in the tasting notes. The mouthfeel/body of this beer also falters in the style.

Overall, not a bad beer whatsoever, but does not fit into the milk stout style as well as it could have.