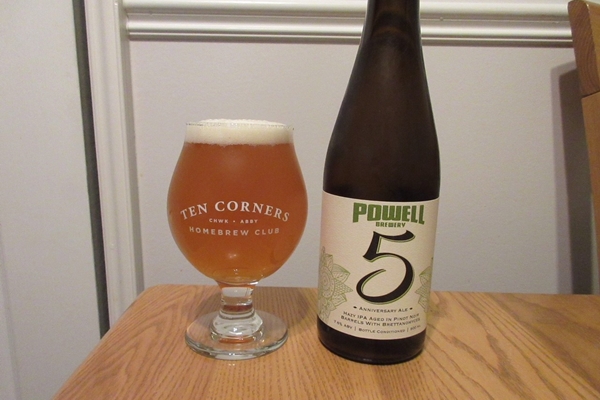 While it might be some time after Powell Brewery celebrated their fifth birthday, it does not mean this beer is not worth trying. The Five Year Anniversary Ale is listed as a ‘hazy IPA aged in Pinot Noir barrels with Brettanomyces’. If you are looking for an interesting and complex beer, here it is.

Powell Brewery may not be the most hyped brewery in B.C., but it deserves its fair share of praise. They consistently churn out solid beers, and the Five Year Anniversary Ale is one of them. This beer will have even the most particular of beer connoisseurs leaving satisfied.

Let’s take a look at this complex brew.

Pours a semi-translucent golden colour from the bottle. When in the glass it is a much deeper golden colour with an almost slightly amber hue to it. It would definitely be categorized as hazy as there is virtually no chance of you seeing anything through this one.

You get the pineapple aroma impart by brettanomyces immediately after cracking open the bottle. This aroma is just as strong in the pour, and you do not even need to pick up the glass to catch this. Fantastic and delicious smelling pineapple aroma.

Another note you get from the Brett used is the ever so slightly funky note that is common with it. This beer is certainly not the funkiest beer, and nowhere near something like a farmhouse ale, but it is enough to be noticed. It adds a very nice level of complexity to this beer.

It is hard to get anything beyond the Brett in most beers, and this one is no exception to that statement. There is a very light trace of other citrus fruit notes, which are likely imparted by the hops used in this brew.

Overall, a very tasty nose/aroma that hits you in the face with pineapple and a slight funk. If you like beers that incorporate Brett you will love this one.

You get the juicy notes from a typical hazy IPA right off the bat. Citrus fruits and tropical notes. There is a very moderate level of bitterness, which is slightly accentuated by the smooth and dry finish to this beer.

There is also a very distinct funky note from the Brett. It is not overpowering like it can be sometimes but plays rather well with the other notes this beer has to offer.

The other major player here is the dry and semi-smooth finish. This beer was aged in Pinot Noir barrels, so it would be an educated guess to say that this is a note imparted by that. It is a very smooth finish, much like you would expect from a nice Pinot Noir.

Overall, this is an immensely complex beer on your palate. With so many things going on it would be very easy to get to the level of being too busy, but that is not happening here. When you can find a way to keep the Brett from dominating everything else, you have done a good job. Very well done beer.

The labeling/branding is simple and smooth. A white label with a light green floral sketching on both sides of it. There is a big five on the front and centre of the label underneath the name of Powell Brewery. Definitely the least complex part of this beer.

The head this beer pours is unsurprisingly very significant. This is a common characteristic of a beer that uses Brettanomyces in the fermentation and ageing process. It sticks around for as long as you let it before drinking the beer.

There is also a significant amount of lacing on the glass from this one. With it being a hazy IPA with Brett, this is to be expected. Almost completely covers the glass in thick patches of lacing.

The carbonation level makes this beer a somewhat bright one. One of the many notes that help to balance each other out and a makes the finish slightly dry.

A very complex tasting beer. Notes from the Pinot Noir barrels, Brettanomyces, and the typical hazy IPA tastes. The nose is much less complex, with the Brett dominating everything else there. Overall, this is a very nice beer.

And if you want to see all of the photos featured in B.C. Beer Reviews, and even some that do not make it into these articles, you can follow me on Instagram: nhendy5. You can also see much more concise versions of these reviews up to 24 hours in advance by adding me on Untappd: RedArmyNic.