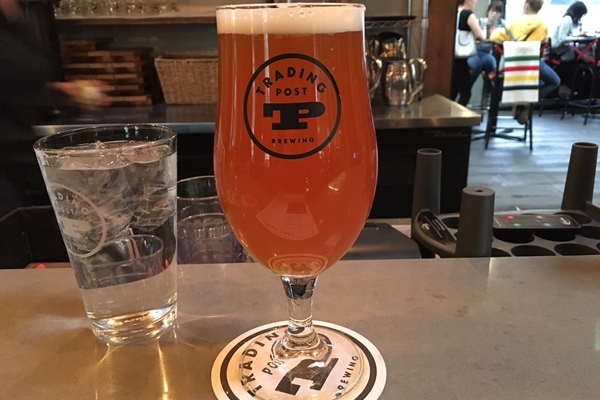 Brassneck Brewery is one of the many breweries in this province pushing the boundaries of styles. The Multiweizen from Brassneck is a fine example of that point. This interesting take on a Hefeweizen uses five different malts: rye, wheat, barley, oats, and corn. Talk about an alternative grain beer.

This is not the first entry from Brassneck Brewery into this series, and it likely will not be the last. With their interesting and adventurous takes on traditional styles, it is hard to not want to try their brews. Having a hefeweizen, you expect banana and clove, but this beer had so much more to offer.

There is a nice deep amber colour to this beer. Not the same amber hue you would expect from a traditional ale but closer to that of honey. This is an interesting colour for a hefeweizen, as you would expect something closer to a straw-like tint.

The first thing you get from the nose/aroma of this beer is a powerful banana note, which is undeniably a byproduct of the hefeweizen yeast strain used. There is not much, if any, of a clove presence and there is a light touch of the ester profile that is common to this style.

This beer has a fairly complex nose/aroma, but it is not too busy overall. Multiple notes play in harmony with each other in this one. As soon as one disappears another pops up, keeping you on your toes throughout.

You get the typical hefeweizen notes from the first sip of this beer. There is a light banana note, a very light touch of clove, and once again the ester profile is noticeable in the background. In these notes, this beer hits the style quite nicely.

Whereas you get multiple notes from the malt/grain bill in the nose/aroma, you do not get as many in the tasting notes. There is a sweetness to this beer and one that is common with the use of corn and oats. Overall it is a sweet beer but to the point of bordering being cloyingly sweet.

There is literally zero perceivable hop presence in this beer. No notes of citrus, tropical fruits, noble hop notes, bitterness, or anything else that can be attributed to hops. This is perfectly okay with the notes that the yeast profile has imparted on this beer.

The head this beer pours off the tap is above average. However, the retention is slightly below average. It sticks around long enough to be noticed, but not much longer than that.

There is also a surprisingly decent amount of lacing on this glass. It certainly does not coat the glass, but there are enough thin layers of lacing to start to become noticeable when the glass is empty.

There is a fairly significant body to this beer, which is not all that surprising with this style. Despite it having a significant body, this is one heck of a smooth drinking beer. The body of this beer could best be described as creamy and full. This plays well with the sweetness imparted by the malt/grain bill.

You get the typical notes of banana and clove in this interesting take on a hefeweizen. The malt/grain bill is drastically different from what you would expect, and it adds another dimension to this beer that it would lack without it. The creamy mouthfeel is nice, and it is not enough to keep from the finish being fairly smooth overall.

And if you want to see all of the photos featured in B.C. Beer Reviews, and other cool B.C. craft beer pictures, follow me on Instagram: nhendy5. You can also see much more concise versions of these reviews up to 24 hours in advance by adding me on Untappd: RedArmyNic.