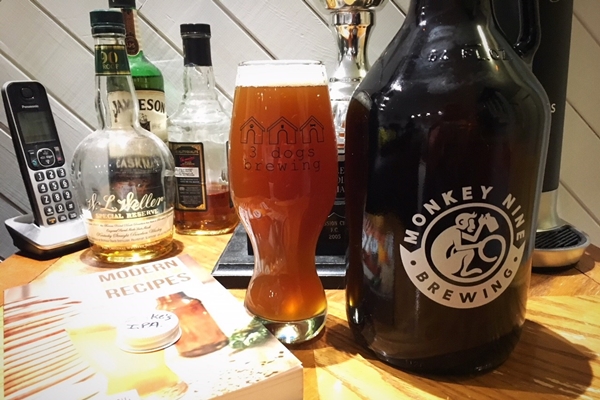 White Rock, British Columbia is not exactly known for being a vibrant craft beer destination. Despite that, there is a relatively new brewery in White Rock churning out some tasty dog-themed brews, 3 Dogs Brewing. The two owners name almost all of their beers after dogs, with the Jake’s IPA taking its name from one of their own canines.

3 Dogs Brewing is still a fledgeling brewery, but they are putting out some tasty beers. They have yet to can or bottle anything, so if their name does not ring a bell, that is why. But if you find yourself in White Rock, BC then 3 Dogs is a stop that you should certainly make.

This beer has a very deep amber colour that is bordering on being brown. There is a cloudy hue to this one when pouring into the glass. In the glass, there is absolutely zero clarity to this beer.

The first notes you get are all from the hops. There is a citrus and tropical fruit aroma from the Simcoe and Amarillo hops that were used in this brew. There is a very tasty aroma that is reminiscent of mango.

Aside from the hop notes, there is not much else going on in this beer. There is a very light sweet note from the malt/grain bill, but it is very much hidden in behind the hoppy notes. This is not a bad thing for this brew.

Overall, this beer is a citrus and tropical fruit hop bomb. Surprisingly, there is not much of a dank aroma whatsoever. This is somewhat surprising with how strong the hop presence is in the nose/aroma.

While it does not hit you immediately, the citrus and tropical fruit notes follow into the tasting notes. Very noticeable and strong alongside the malt/grain bill notes at play here.

There is also a nice level of bitterness to this beer. Present, but not at all overpowering. This is a beer that newcomers to hop-forward beers could palate quite easily. Very noticeable, but palatable level.

Overall, this is a smooth drinking and very well balanced beer. The malt/grain bill presence off the bat helps to balance the level of strong citrus and tropical fruit notes imparted by the hops. There is a nice and clean bittering charge to finish off the beer. Very well done and easy drinking beer.

When pouring from the growler there is a noticeable head to this beer. The retention is quite solid as a moderate head sticks around for quite a substantial amount of time.

There is a very noticeable amount of lacing on the glass from this beer. Thin layers of lacing throughout, but nothing thick on the glass. This is to be expected from the noticeable hop presence throughout the nose/aroma and the tasting notes.

The body of this beer is somewhat thick but still fairly smooth overall. The malt/grain bill plays a big role in this, and it is a nice note to help balance this beer out from being too far in the direction of hoppiness, not that being that way is always a bad thing. Very well balanced beer overall.

The carbonation level is not very noticeable. There is enough to not come off as flat, but not anywhere enough to be a crisp beer. This beer trends towards the lower end of carbonation.

There is a very noticeable hop presence in this beer, but a presentable level of bitterness. The malt/grain bill comes out almost entirely in the colour and the tasting notes, not having any impact on the nose/aroma. This is a well-balanced beer.

You can also see all of the photos featured in B.C. Beer Reviews, and many others, by following me on Instagram: nhendy5. And if you want to see much more concise versions of these reviews, add me on Untappd: RedArmyNic.