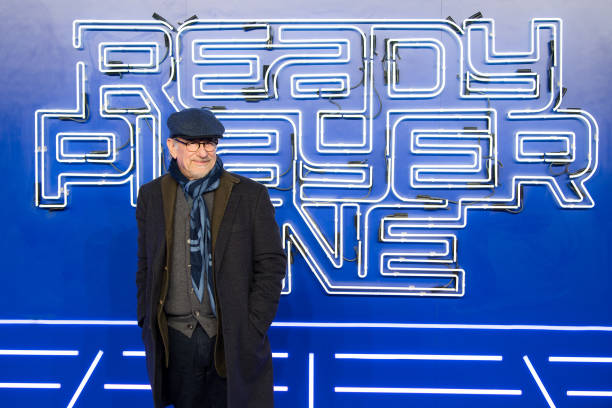 Ready Player One is directed by Steven Spielberg and based on Ernest Cline’s bestselling novel of the same name. The film takes place in a not-so-distant future where a virtual reality world called the Oasis has become a significant part of everyday life. It is where people go to escape their own realities and immerse themselves in a world where seemingly everything is within the realm of possibility. When the creator of the Oasis passes away, he leaves all his shares in the company to whoever can find the “easter egg” which can be obtained by locating three hidden keys within the game. Thus begins the hunt for a fortune, a race that involves both gamers and corporate entities fighting for the same prize, and it’s one hell of a ride.

Written by Zak Penn and Ernest Cline, the screenplay for Ready Player One does stray quite a bit from the novel. That being said, one need not stick directly to the source material in order to capture the essence of it and make a film that works well in its own right. Ready Player One does exactly that. It captures the heart of the novel and mixes it with some Spielberg magic to create a fun and exhilarating interpretation for the silver screen. This film moves at a breakneck pace throughout and rarely has a dull moment, which is impressive considering its lofty two-and-a-half hour runtime. The only thing that matches the brisk pace of the film is how quickly and frequently the references come at you. Yes, if you haven’t already heard, this film is chock full of nostalgic references that will strike a chord with multiple generations. There is something in here for everyone.

The story itself is extremely interesting and strangely relevant considering it takes place 30 years in the future. It comments on the attachment of today’s youth to the virtual world via mediums like video games, social media, etc. as well as the constant struggle between gamers and money hungry corporations (I’m looking at you EA). Obviously, it takes both of these things to the extreme but it’s a relevant commentary nonetheless.

Tye Sheridan stars as Wade Watts aka Parzival alongside Olivia Cooke as Samantha Cook aka Art3mis. While both were fantastic in their respective roles, neither character had much of a story arc, which is especially noticeable given these are the two leads in the film. There were scenes in the film that would have had much more weight had the audience gotten to spend an additional couple of scenes with the actual characters outside of their avatars. While this could be a major issue for most movies, this could have very well been a deliberate choice for Ready Player One. One of the major thematic points in the story was that you never truly know someone until you meet them in the real world because, in the virtual world, you only know what that person wants you to know. Considering most of the character interactions happen in the virtual world, it’s likely that this was an artistic decision.

Ben Mendelsohn plays Nolan Sorrento, the CEO of the corporation competing for this “easter egg.” As always Mendelsohn nails the role of the tightly wound villain. TJ Miller voices his bounty hunter, i-R0k, and is hilarious. The odd mix of the intimidating look of his avatar with the voice and humor of TJ Miller works beautifully. On the other hand, Sorrento’s assistant/advisor Zandor, played by Hannah John-Kamen, is extremely cookie cutter and is never really given much to do in the script.

Steven Spielberg has gone on record saying how this was the most difficult film he has worked on since Saving Private Ryan and it’s no surprise. This film is a technical marvel and dazzling to look at. The visual effects are spectacular and are complemented by the ever-reliable cinematography work of longtime Spielberg collaborator Janusz Kaminski. Special effects aside, Spielberg captured something in Ready Player One that has seemed to elude him in recent years. There is a certain Spielberg magic that was present in films like Close Encounters of the Third Kind, Raiders of the Lost Ark, and Jurassic Park. I don’t know if it was the nostalgic references, the sense of wonder brought on by the amazing special effects, or just the plain fun of it all, but this film felt like it captured the magic of his earlier work. This felt like classic Spielberg.

Ready Player One is an undoubtedly fun film that seems to showcase many of Spielberg’s greatest strengths as a director. It is as ambitious as it is nostalgic and has plenty of heart to boot. The special effects alone are something to behold. See this on the biggest screen possible.

This article was originally published on Letterboxd. Follow my Letterboxd page at letterboxd.com/fanreport for more movie related content, including past reviews and various top 10 lists. As always, be sure to check back with LWOS for more movie articles and reviews coming your way.