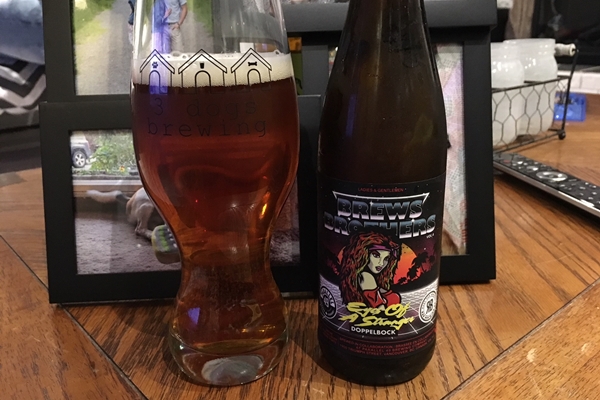 B.C. Beer Reviews is back to take the third look of the week at a product of the Brews Brothers series. Parallel 49 Brewing has teamed up with another Vancouver-based brewery in R&B Brewing to brew a tradition German-style beverage, a Dopplebock.

A Dopplebock is a beer that is hard to make and easy to mess up. It can easily become too sweet or too boozy. You need to find the happy medium with both. And with virtually zero hop presence, there is nowhere to hide. That being said, both Parallel 49 and R&B Brewing decided to take on the challenge of making one.

Trust me, this is not the “wrong glass, sir.”

Pours a slightly pale brown colour from the bottle. When it is in the glass it is a lighter darker, but not much. The clarity of this beer is surprisingly nice as you can see through it with ease.

Exactly what you would expect from a Dopplebock in that it is entirely malt-driven. The German malts dominate this beer, giving it a sweet but not cloyingly sweet aroma. There is a hint of caramel and a bready aroma to this beer.

Aside from that, there is a noticeable boozy aroma to this brew. This is not at all surprising, especially given the fact that it clocks in at an impressive 8.1% ABV. Despite the relatively high ABV, it is not overpowering in the slightest. A perfect touch of boozy notes to this one without taking away from the malt/grain bill presence.

Outside of those two notes, there is not much else to this one. Normally this could be a downvote to the beer, but given the style, it is a good thing. This is a malt-forward style that very often has a strong boozy note. Hits the style nicely and keeps it simple in a good way.

The bready and caramel notes dominate your palate with this one. It is super sweet on your palate, with the caramel dominating the finer notes. The finish has a bread/toast note to it, but it is not even close to having a roasted or burnt taste.

After those notes, the boozy taste comes back again, this time on the back end of your palate. The finish has a very noticeable boozy note to it, but once again it does not overpower the other notes at play here.

Much like in the nose/aroma, this brew is rather simple in the tasting notes. A malt/grain bill that gives you caramel and bread notes and a boozy finish. Once again, spot on with the style.

Just like the rest of the Brews Brothers series, this one has a nice and cartoonish style to it. The character is laid underneath the Brews Brothers branding and in between that of Parallel 49 and R&B Brewing. Noticeable and nice.

The head this beer pours is middle of the road. The retention of that head, however, is above average. Even after taking a few drinks of this one the head sticks around.

There is literally zero lacing on the glass from this beer. It certainly is not sparkling clean, but it is as close to that after having a beer in it as it can be.

The carbonation level is moderate as well. It is enough to help to give it a somewhat crisp finish, but not enough to categorize it as biting or dry.

Much like you would expect from a Dopplebock, this beer is a malt-forward one with boozy notes to finish it off. The malt/grain bill imparts caramel and bready notes that are very pleasant. There is little to no perceivable hop presence and a somewhat crisp finish from the level of carbonation. Overall, it hits the style quite nicely.

And if you want to see all of the photos featured in B.C. Beer Reviews, and other awesome beer photos, follow me on Instagram: nhendy5. You can also see much more concise versions of these reviews up to 24 hours in advance by adding me on Untappd: RedArmyNic.