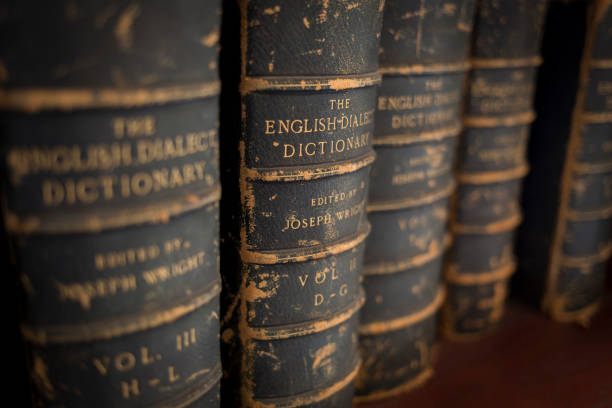 Jez Burrows, British designer, illustrator, and published author, has just released his first book, Dictionary Stories: Short Fictions and Other Findings. It’s a unique entry in the crowded literary landscape—every (very) short fiction in it is composed entirely of sample sentences taken from dictionaries. What could have been a gimmicky collection of nonsense instead shines through as one of the most inventive, varied, and entertaining books to hit shelves in years; it frightens and delights, sometimes sad, sometimes unsettling, and often hilarious.

In the book’s introduction, Burrows explains that the idea that would grow into Dictionary Stories originally came to him in the spring of 2015 while looking up the definition of the word “study.” Tacked onto the New Oxford American Dictionary definition of the word was an example sentence: “He perched on the edge of the bed, a study in confusion and misery.” Burrows was drawn to the statement’s “distinct narrative,” saying “it was as if a small piece of fiction had somehow wandered out of its own book and settled down in the dictionary.”

He decided to try combining two of the example sentences under “study” and liked the result; they played well together, fleshed one another out, and gave credence to the idea that tiny pieces of fiction may have “settled down” in the dictionary. Both examples were on the dreary side of things and putting them together only enhanced the effect. So, he looked up the words “bleak” and “untidy,” added their example sentences to what he already had, and, pleased with the results, began jigsawing together other example sentences to see what else he could come up with.

Burrows began posting the resulting stories online, found an audience, an agent, and a publisher, then settled in to write this book.

Because simply cutting and pasting example sentences together made his writing “sound like a robot attempting to emulate [Ernest] Hemingway,” and because he needed guidelines for himself so he wouldn’t feel like he was cheating when he crafted his short fictions, Burrows set rules to keep the work challenging and rewarding.

He decided that adding punctuation was okay, as was inserting conjunctions, prepositions, and adverbs between example sentences (but not within sentences) to improve flow and readability. He could also adjust pronouns/names as necessary and change sentence tense. To “keep [himself] honest, and the stories faithful to the constraint,” Burrows decided that any edits had to make up less than five percent of any completed story and that any edits made would need to “leave individual sentences as functioning examples of the given word.”

For a reader, the rules he set for himself are, of course, less important than the finished product. If the restrictions came at the expense of his creation, what was the point? However, in the case of Dictionary Stories, knowing the constraints Burrows worked within makes the finished product that much more delightful.

Before he launches into the fictions themselves, Burrows takes the time to introduce each of the 12 dictionaries he pulled sentences from to create his stories. Every sentence in every fiction has the word it was an example of underlined. At the end of each fiction Burrows includes the dictionaries he pulled examples from when writing it, meaning that (if you really want to) it’s possible to check his work and locate the example sentences for each individual piece of writing. It probably says better things about you if you don’t have the time to do that, but it’s an option.

The fictions themselves vary from page to page. Some are presented as monologues, others as brief dialogues; there are shopping lists, recipes, and fictional mixtape track listings (which is the reason for using “fictions” instead of “stories” when referring to the works in the collection); genre is fluid and Burrows moves from noir to science-fiction to romance, depending on what he was able to conjure up when toying with his example sentences. Some of the entries here are a handful of sentences in length, while others go on for several paragraphs; very few are of any significant length, but almost all leave an impression thanks to how masterfully Burrows has crafted them. The entries are grouped together by theme and the themes are, naturally, presented alphabetically, from “aggression, passive” to “zombies.”

While some of the stories function as snapshots of thrillers or romantic dramas (and do so quite well), the biggest surprise while reading this book is how funny it is. Burrows has a well-honed taste for the absurd and it plays beautifully in this collection. Whether he’s running through fictional early drafts of the Five Stages of Grief, telling the tale of a Canadian gone mad after being confused for an American, or providing an alternate account of Genesis 1 (in which God “[pleads] not guilty to murder, and [insists] that the cocaine in the glove compartment was a plant”), Burrows is always capable of finding the funniest version of his fiction and sharing it with his readers.

But, as mentioned, funny isn’t the only thing Burrows does well. There are a couple of entries filed under “Noir” (I & II) that could slot into a Raymond Chandler story without incident; they’re short, but some of the more atmospheric shorts provided here. Furthermore, while Burrows was originally concerned his stories would come across as a poor imitation of Hemingway, what he ended up with on several occasions was a good imitation of Raymond Carver, or, at the very least, a solid homage to him. Some of the stories have the understated-but-better-for-it vibe of Carver’s work that will have you filling in the blanks and thinking about the characters even as you move on to the next entry.

When all is said and done, this is an astonishing little book that feels like it shouldn’t exist, but (thankfully) does. It’s funny, smart, sometimes thrilling, sometimes heartbreaking, and always impressive. The fact that the stories are pulled from dictionaries—just like the one on your shelf that hasn’t been touched in years—makes what’s been accomplished here even more noteworthy. This is Jez Burrows’s first book, but hopefully not his last. While an entire series of Dictionary Stories would be a welcome addition to any bookshelf, the author’s humor and ability to put together a good story (on display in miniature here) will hopefully be on display in longer prose in the future.

Dictionary Stories: Short Fictions and Other Findings will make you thankful for dictionaries, thankful for Jez Burrows, and will remind you of the power and potential of creativity. It comes in at around 250 pages, but you’ll breeze right through it thanks to the quality of the writing (and the brevity of individual pieces). You can (and should) purchase it from your local bookseller, Barnes & Noble, or Amazon now.