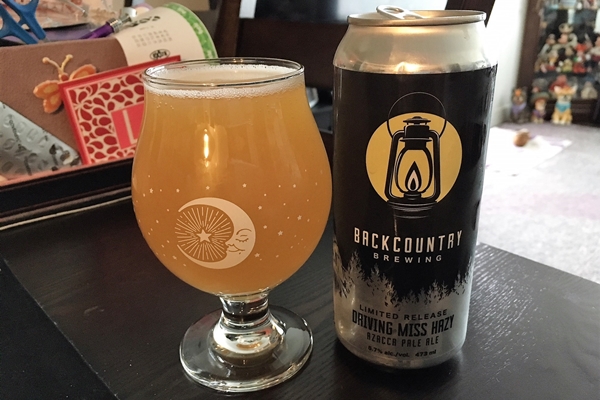 Backcountry Brewing is starting to gain traction in the B.C. craft beer scene, and for good reason. Their Widowmaker India Pale Ale is one heck of a rendition of the ever-popular style of American India Pale Ale. They recently released some limited edition beers and B.C. Beer Reviews is here to take a look at the Azacca Pale Ale.

Including this beer and the aforementioned Widowmaker India Pale Ale, Backcountry Brewing is starting to make a name for themselves as brewery to go to for hop-forward beers. This one, Trailbreaker, the Widowmaker IPA, the Secret Handshake NEIPA and their Off the Top Ropes double IPA have all gotten solid reviews.

Let’s see if this one lives up to the hype and the reviews.

This brew pours an opaque orange colour from the can. It is the definition of the word Hazy in the can. Driving Miss Hazy is a very suitable name for this one as it right on the Hazy hype train.

Tropical and citrus fruit aromas dominate the nose/aroma of this beer. Using the word juicy is a perfect descriptor for this one. To be slightly more specific, fleshy fruits like mango are at the forefront of the nose/aroma.

The hop presence, outside of the tropical and fruity aromas, could be categorized as dank. It is not to the point of being catty, but is certainly a very powerful note to this one. If you are not a hophead, this one is not for you.

Overall, there is very little to the nose/aroma than the notes imparted by the hops. It is a juicy and slightly dank hop bomb of a brew.

Much like in the nose/aroma, the tasting notes of this beer are all hop-forward. Juicy and tropical fruit notes come at you without holding back. It is a smooth and citrusy taste, and it is quite tasty.

Aside from the juicy and tropical hop notes, there is a noticeable sweetness imparted by the malt/grain bill. It gives the beer a significant and sweet body that is very pleasant. It goes very well with the juicy notes from the hops.

Overall, this is a hop-forward Beer, which is not at all surprising when you see and smell this brew. Juicy, tropical and hop-forward with a smooth and sweet body from the malt/grain bill.

The branding/labeling is simple and straightforward, but pretty sharp overall. A black label with pine trees along the bottom line of the label. This is all below the name of Backcountry Brewing and the lamplight logo they sport.

The head this beer pours is moderate. The retention, however, is fairly significant. It sticks around for quite a significant amount of time after pouring from the can.

The carbonation level is moderate in this one as well. It is not enough to be considered as being crisp, but it certainly contrasts the smoothness of the body.

This beer jumps on the hype train of hazy beers to a tee, and that explains why there was so much hype around its release. It hits the characteristics of being hazy in colour, and juicy and tropical in both the nose/aroma and the tasting notes. The bitterness is present, but fairly subdued when looking at the beer as a whole.

You can also see all of the photos featured in B.C. Beer Reviews, and other awesome beer photos, by following me on Instagram: nhendy5. And if you want to see much more concise versions of these reviews you can add me on Untappd: RedArmyNic.