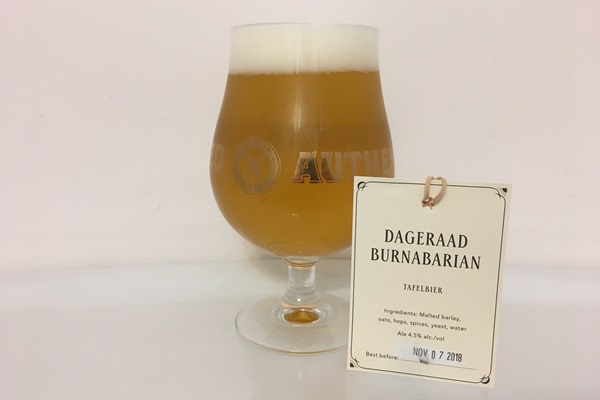 While British Columbia may be a location in North America that offers up a plethora of choices in regards to beer styles, one that is lacking is Belgian beers. The only brewery taking on what is a relatively daunting task is that of Dageraad Brewing. It is less than surprising, given that fact, that they were named Canadian Brewery of the Year and won multiple awards for their Belgian beers at the 2018 BC Beer Awards.

This beer pours an extremely pale golden colour. In the glass it is golden-straw in colour with a slight haze to it. Given the fact that many Belgian yeast strains are not highly flocculent (do not drop out of solution), this is not a defect whatsoever and is entirely acceptable for the style.

The beautiful thing about Belgian beers is that they are extremely complex, both in their aroma and taste. The ester profiles and phenolics that Belgian yeast can give off in the final product make for a beautifully complex beer. This beer is no exception to that statement.

There is a very apparent banana aromatic to this beer. Behind that is a touch of the pink bubblegum ester you can get from Belgian brews. One aroma that is not present that is common with Belgian yeast strains is the clove aroma. There is also no apparent presence of fusel alcohol aromatics in this beer.

The tasting notes are pretty well the same as the nose/aroma. There is a very apparent taste of banana in this beer. This is accompanied by a light touch of pink bubblegum.

Aside from the ester profile, this beer provides you with a sweetness up front that does not completely dissipate, but lightens as you finish each drink. This is what you would want from a Belgian beer.

There is no branding to speak of outside of the growler tag. The simplistic style and clean writing matches up well with their style and their niche of brewing Belgian beverages.

This beer pours a significant head, as is expected from almost any Belgian style. The retention of that head is equally as impressive, sticking around long after each pour.

You get the typical Belgian lacing on the glass from this beer. The glass has thick white patches here and there.

This is a nice representation of what a B.C. brewer can do when tackling Belgian beers. It is both complex and approachable, while not being too heavy or sweet to drink more than one of. It is a truly delicious and sessionable beer.