In the middle of Donald Trump’s presidency, two scholars of authoritarianism sat down in the Brooklyn Historical Society to talk about autocracy. Timothy Snyder had become a bestselling author since Trump won the 2016 elections. His work on post-communist Europe had made him a standout historian from Yale. But, it was his work on Stalinism and Nazism, his bestseller, Bloodlands: Europe Between Stalin and Hitler, plus, his guide through an authoritarian leader (and autocracy), On Tyranny: Twenty Lessons from the Twentieth Century, that catapulted him to mainstream magazines and newspapers in the country. His warnings and lessons in the twentieth century, especially in Poland, Germany, and Ukraine, to the present, made him a beacon of guidance throughout the strongman act of Trump.

Going back to his talk in Brooklyn, Snyder noted to his fellow scholar that he was surprised to find out who did predict the rise and success of Donald Trump. He noticed that many touted the possibility as farfetched, but, that some select members of society knew that this was a reality and that it was coming. He notes that “fellow Midwesterners” as the filmmaker, Michael Moore, students of totalitarianism, and the Ukrainians and the Russians (many of them fleeing autocracy in Russia) knew that this was a possibility. One of those Russians that still had fresh memories of Vladimir Putin steering Russia – yet again – towards a mode of authoritarianism (autocracy), suppressing free speech, imprisoning political opponents, creating politics of the “other”, was Masha Gessen.

The Trouble with Politics

In Masha Gessen’s new book, Surviving Autocracy (Riverhead Books, 2020), Gessen cements ‘they’[1] (Gessen’s preferred pronoun as a trans nonbinary individual) status as one of the best interlocutors of the Trump phenomenon. Numerous books have been published on the Trump phenomenon, especially by neoconservatives that were turned off by Trump’s actions.  They accuse him of being dangerous, a liar, a fraud, catastrophic to foreign policy. (Liberals tend to publish books on Trump’s “relationship” with Russia and his dealings with foreign leaders, especially dictators.) Yet, as Gessen presents in their new book, many of these analyses tend to agree with most Trump rhetoric or normalize his actions; only disagreeing on the method. Gessen’s books is an indictment on the media, the Democratic party, the so-called “resistance”, and the past 30 years of politics. Gessen writes about the relationship of money of politics that brought us to Trump:

Access to the media, which is to say, access to voters, also costs money: wherein many democracies media are bound by obligations to provide airtime to candidates, in America the primary vehicle for addressing voters is through paid advertisements. No one in the political mainstream seemed to think anything was wrong with the marriage of money and politics. Former elected officials went to work as lobbyists. Using campaign contributions and lobbying to create (or kill) laws was normal. Power begat money, and money begat more power. We could call that system preceded and precipitated Trump’s rise and oligarchy, and we would be right.

Gessen thinks of Trump as a representation of the “obscene nature” of politics today. Trump doesn’t approach the political arena with an aura of decency or an illusion of moral aspiration. Instead, what you get with Trump is a grotesque exposure of the political system.

Surviving Autocracy is another addition to a flourishing genre inside the non-fiction, current affairs cannon, that concentrates on the rise of autocratic leaders across the globe. Snyder has two books on this genre, the last being The Road to Unfreedom (Tim Duggan Books, 2018). As Snyder, Gessen presents the rise of Trump not as an isolated phenomenon, but as another element in the current danger of autocracy. Point to South America and you find a far-right populist in Brazil, Jair Bolsonaro, imprisoning political opponents; in Hungary, Viktor Orbán has consolidated his power, dismantling institutions; in India, Narendra Modi is replacing history textbooks to sell nationalist myths, while also, creating a hostile environment for Muslims. And yet, in contrast with Snyder, Gessen does not equalize Trump to Putin or paints him as similarly dangerous.

Masha Gessen grew up in Soviet Russia but moved to the US while ‘they’ was still a teenager. When the Soviet Union collapsed, Gessen came back to cover the post-Soviet Russia that was captured by Putin right at the start of the twenty-first century. During Putin’s rise, Gessen experienced the transition of Russia -yet again- towards autocracy. ‘They’ was dismissed from Vokrug Sveta the oldest magazine in Russia, because of their refusal to send a reporter to cover an event on nature conservation in which Putin was part. Moreover, Gessen’s book on Putin, The Man Without a Face: The Unlikely Rise of Vladimir Putin, assured ‘they’ that the Russian government was elevating its hostility. (An editor tried to publish the book in Russia but was shut down by the government.) When Gessen was threatened to have their adopted son removed by the Russian government, the US a safe haven from Autocracy.

Trump and the Mystique of Putin

Gessen is very careful when making analogies about Trump and Russia. While many writers want to connect the dots with the “Russian conspiracy” that swept the airways in liberal networks across the US, Gessen refuses to give such credit to Trump or even his supposedly conspirator. “Putin, in the American imagination, was turning into a brilliant strategist, a skilled secret agent who was plotting the end of the Western world,” writes Gessen. “In fact, Putin was and remains a poorly educated, underinformed, uncurious man whose ambition is vastly out of proportion to his understanding of the world.” Society tends to make of previous authoritarian leaders, like Adolf Hitler or Joseph Stalin, as “masterminds of horror” that calculate every step. Moreover, as Gessen presents in Surviving Autocracy: “Contemporary strongmen, because we watch their ascent in real-time, retain their more human outlines.”

Many books on Trump concentrate on an aspect of his character, the dysfunctional White House, or his shady business dealings. Surviving Autocracy features those same patterns but connects them to the larger problem of US politics. Gessen believes that Trump is the result of ways in which the US has become less democratic, giving examples as to Obama’s overuse of executive power or when Bush went into Iraq with the lie of Weapons of Mass Destruction (WMD) that Saddam Hussein supposedly had. Of course, Gessen does not level the playing field between these presidents and Trump. Gessen writes that Trump is an aspirational autocrat that, “wants to be not merely their friend [other autocrats like Putin, Bolsonaro, and Kim Jong-un] but one of them.” Moreover, Gessen writes that the current political climate has “become a space free from imagination and aspiration.” These technocratic aspirations and dull attitudes in politics gave the opportunity for the rise of Trump. Gessen explains: “Rather than talk about the future, we talked about policy; rather than lack about what’s right and just, we talked about what’s realistic and lawful; rather than discuss values, we discussed strategies. It was dull, neutral, largely hollow space that Trump so easily filled with his crudeness, cruelty, and lies.”

The Fight Against Autocracy

The media especially plays a great deal in the current climate in which Trump reigns. While politicians can only be electable as technocrats that can beat Trump, the media tends to play “fair” with the actions of the president. The search for “objectivity” by The New York Times, as Gessen explains, tends to normalize Trump’s actions, and not called him for what he really is or does.  Gessen explains that because of the current institutional culture that “privileges neutrality over… substance”, the American media became “the president’s accomplices.” Gessen insists:

Most American journalists and editors would agree that this is as it should be – the journalists are working on behalf of the public, and their relationship with power should not be overly cozy – but in reality, the tone of neutrality, authority, and restraint that legacy publications adopt has a way of shifting the journalists away from the public and towards the person in power, making them act more like go-betweens than representatives of one side and one side only. That makes the media ill-equipped to resist the autocrat’s project of coming to dominate the communications sphere.

How do we Survive Autocracy knowing all these indictments on the current political climate? Gessen explains that we must take a moral authority and stop toning down the actions of Trump.

Every time a commentator calls Trump “presidential,” every time a politician accepts his terms of debate, or every time a journalist simply covers Trump’s actions and statements as one would normally cover politics, the message is the same: Trump does not live up – or down – to the stature of history-book monsters. Time itself is complicit. Anything that happens here and now is normalized, not solely through the moral failure of contemporaries but simply by virtue of actually existing.

Surviving Autocracy finds hope in the current new crop of Democrats, as the re-elected congresswoman, Alexandria Ocasio-Cortez. Gessen explains that Ocasio-Cortez and fellow members of the “squad” (which includes Ilhan Omar, Ayanna Pressley, and Rashida Tlaib) “focus on dignity rather than power, equality rather than wealth, and solidarity rather than competition.” Instead of the old strategies of the Democratic Party that focus on “votes in terms of policy proposal, solutions, and of course, fund-raising”, Gessen argues that the way of these new democrats counters Trump’s strategy that utilizes a White Supremacist past to create the politics of “US vs. Them.” Gessen’s book acts as a warning for those that still don’t see Trump as equally dangerous as authoritarians of the past and are willing to play passive or middleman with him. When Minerva’s owl spreads its wing and takes flight, those who were more concerned with neutrality than what was right will be on the wrong side of history.

[1] Throughout this article I’ll be using Gessen’s preferred pronoun, noting they with quotation marks. 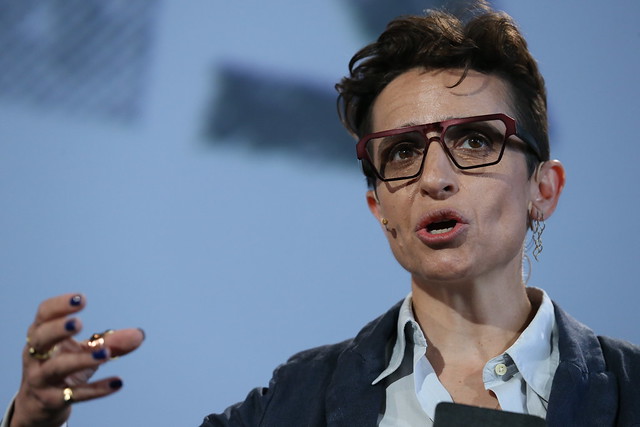