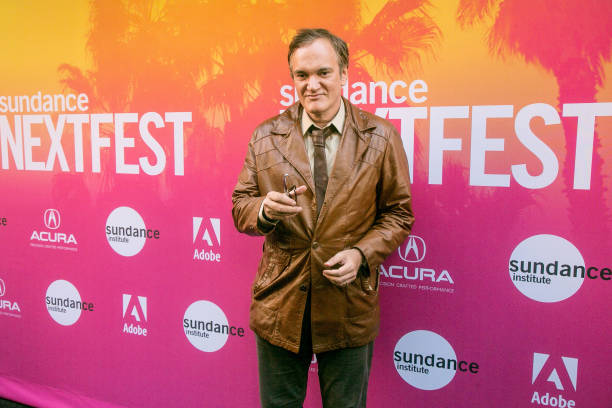 The news recently dropped that Quentin Tarantino may be directing his own Star Trek movie. If that ever does come to pass, he will surely be reined in and have his artistic impulses whittled down by studio executives, but that’s a conversation for another day. Right now, all we can do with this newfound information is fantasize about what a pure Tarantino Star Trek film would look like. It’s also an opportunity to mourn those who will suffer the most if cinema’s bloodiest auteurs gets his hands on one of science-fiction’s most beloved franchises: the redshirts.

Requiem for a Redshirt: Quentin Tarantino and Star Trek

Say what you will about Quentin Tarantino, the man is a driven visionary. He revels in hyper-stylized bloodbaths, he doesn’t shy away from offensive language when he believes it’s being used in service to his art, and he has spent the last 20 years doing his part to keep food on Samuel L. Jackson’s table. Whether or not you enjoy his films, you have to respect the fact that Tarantino has never compromised his vision or phoned it in on one of his directing gigs. The man is even happy to bend history itself to his will in the interest of telling the best possible version of a story: in Inglorious Basterds, he changes the ending of World War II.

In fact, the only thing that has kept Tarantino’s movies (just barely) in check has been the planet they’re set on. For all the over-the-top, buckets-of-blood violence they exhibit, Quentin Tarantino movies are very much a product of the planet Earth. And, going further, they’re very much a product of a (hyper-violent, snappy-dialogue-abound) version of Earth that doesn’t concern itself with the supernatural. There are no ghosts in Tarantino’s work, no aliens or laser-based weaponry; no one has ever been to space in one of his movies; and if characters in his films “boldly go” anywhere, it’s typically to their deaths.

Enter: a Deadline article reporting that a writer’s room is being assembled to hash out a Star Trek script based on a story idea Tarantino pitched to J.J. Abrams (Star Trek, Star Wars: The Force Awakens). The article goes on to say that there’s a possibility Abrams will remain attached as producer, leaving the director’s chair open to Tarantino if he so desires. And that makes this as good a time as any to fantasize about what a Tarantino-fied Star Trek film would look like sans all the studio meddling and the restrictions that would be placed on him if he actually did tackle such a project.

First and foremost, imagine the cast. Can you see it now? In a pure Tarantino take on the franchise, Jamie Foxx would play the intrepid captain, retaining all his gunslinging skills from Django Unchained (casually referred to by friends in this movie as “the Fastest Gun in the Final Frontier”) and would run his ship with a firm-but-fair hand. Samuel L. Jackson, Tarantino’s muse, would play Foxx’s curmudgeonly Vulcan second-in-command. The character of Scotty would make the jump to Tarantino’s take, but would be made aggressively German, to be played by Christoph Waltz.

Leonardo DiCaprio would be the antagonist, finally flexing his acting muscles and showing us what he can really do by playing a Klingon—his first role entirely in a foreign language. The Academy would shower him with awards for this and the LA Film Critics would name him the year’s Best Supporting Actor, spitting in the face of Sam Rockwell and whatever movie is graced by one of his top-notch performances that year.

The ranks of the redshirts would be peppered with a who’s who of cameos; Kurt Russell, Tim Roth, and Steve Buscemi would each die the bloodiest deaths ever featured in a Star Trek movie. This would, of course, come only after they’d witnessed the longest exchanges of shockingly dense dialogue ever featured in a Star Trek movie. Uma Thurman would join them, but would usurp the redshirt trope entirely by being the only character in the film who does not die by the time the credits roll.

No matter what happens to the cameo redshirts, their suffering would pale in comparison to what would be done to their nameless brethren. See, the redshirts are where Tarantino would really push himself with this movie. In the past, he’s killed characters with guns and bombs and swords, but Star Trek would allow him to add a galaxy’s worth of new weaponry to his arsenal.

It would also give him an entire group of people who exist solely to die however he sees fit. The systematic slaughter of redshirts (literally referring to the red shirts they wear) was so prevalent in the original Star Trek series that the term has spread throughout science-fiction. It refers to the minor characters killed during a confrontation, typically to highlight the danger facing the heroes.

Tarantino’s vision would feature waves of redshirts being mowed down by strange alien creatures, causing Samuel L. Jackson’s character to shout racial slurs in anger and disbelief for approximately 85% of the movie’s runtime. Klingons (led by DiCaprio) would engage in brutal one-on-one battles with redshirts, wielding their wildly impractical warglaives to deadly effect.

Quentin Tarantino has never had the option of giving his characters phasers before, but rest assured—everyone in his Star Trek movie would dual-wield them. And they wouldn’t be set to stun. Laser beams wouldn’t even cauterize wounds instantly like they do in most science-fiction films; Tarantino would find a way to rationalize using them to hurl even more buckets of blood at his actors as they’re broken, beaten, dismembered, or otherwise discombobulated during zany and highly-aesthetic action sequences.

The odds of us ever actually seeing any of this are slim-to-none. The Deadline article that leaked this information wasn’t able to confirm any of it with Tarantino’s people, and Paramount (the studio behind Star Trek) refused to comment. If anything comes of this, it will likely be a Star Trek movie based on Tarantino’s idea, but helmed by a director who’s easier to manage artistically and a safer bet for a family-friendly action franchise. Tarantino’s notoriously blood-soaked filmography may make him a hard sell for studio executives and, later, parents.

However unlikely it may be, there’s also a possibility that Tarantino could take on this project. It would certainly be a new challenge for him, something decidedly outside his wheelhouse. This piece was written tongue-in-cheek, but a Star Trek film really would make Tarantino address new dramatic and stylistic obstacles. He’s said he wishes to step away from filmmaking after he completes his 10th movie (his ninth, set in Hollywood around the time of the Manson Family murders, is currently in pre-production). It could be that Tarantino would like to do something radically different from what’s come before and work without full artistic control on his last film (unlikely), or it could be that the challenge of creating a franchise film may have him reconsidering his plans for retirement.

Either way, Tarantino’s story idea is still a long way from filming and a lot can happen in the writer’s room. Tarantino may not even be interested in directing a Star Trek film, in spite of the rumors. All we can do for now is wait and raise a glass to the redshirts who’ll be sacrificed at the altar of Tarantino’s artistic vision if he ever does get his hands on the franchise. May God have mercy on their souls.