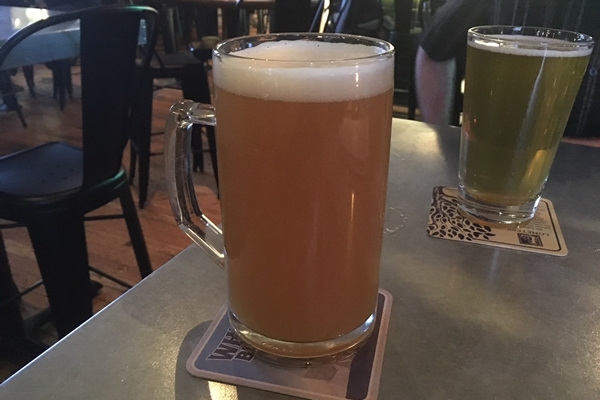 B.C. Beer Reviews is back to take a look at the first ever entry from a relatively new brewery in Backcountry Brewing. Backcountry burst onto the scene in 2017, and that was showcased by them winning Newcomer of the Year at the 2017 BC Beer Awards.

A good way to judge how good a new craft brewery is doing is to drink their pale ale. If it is well-balanced and easy drinking, they probably know what they are doing. One thing that can be said for Backcountry Brewing is they hit the mark with both of those points.

Let’s take a look at this one.

This beer has an overall cloudy hue to it. There is absolutely no chance of seeing through this one. It has a ‘juicy’ colour to it reminiscent of watered down orange juice. It definitely tells you what to expect from the nose/aroma and the tasting notes.

There is a light hoppy bitter characteristic in the nose/aroma of this beer. All the notes the hops impart is a light layer of ‘bitter’ notes and powerful tropical and citrus notes. It truly hits the note for being a new age pale ale or India pale ale.

The nose/aroma of this beer has virtually zero malt/grain presence in it. While it is not overly balanced in that respect, it is a very tasty smelling nose/aroma overall.

As is the case with the nose/aroma, you get a large dosage of tropical and citrus notes from the first sip to the last sip of this beer. The tasting notes you would typically expect from a beer categorized as ‘juicy’ are present throughout.

The level of bitterness encountered could be categorized as moderate. It is noticeable, as it should be in a pale ale, but not at all strong. It does not in any way overpower the tropical and citrus fruit notes that dominate this beer. In this respect, it is a very well-balanced beer.

The malt/grain bill imparts almost no taste, but that does not mean it is nonexistent in this beer. It undeniably plays a large role in the significant body of this beer. There is a smooth and somewhat creamy body to this beer that plays well alongside the tropical and citrus notes. These two notes combined fit it firmly into the new age pale ales that many are looking for.

Overall a very tasty and well-balanced beer. The bitterness is not at all overpowering, and the fruity notes are very welcoming.

The head of this beer is average. The retention of the head is equally as average, disappearing rather quickly. It should be noted that this beer was poured off draft, yet still had a rather moderate head overall.

Unsurprisingly when taking the nose/aroma and tasting notes into account, there is almost no lacing on the glass from this beer. There is undeniably a solid amount of hops used in this one, but the lack of lacing in the glass matches up well with the level of bitterness present in this one.

As stated above, the body of this beer is very nice. There is a very smooth and almost somewhat creamy body to this beer that distinguishes it from you run of the mill pale ale. Fantastic in this regard.

The nose/aroma and tasting notes are packed full of tropical and citrus fruit notes. This makes it a very approachable and tasty beer for hopheads and all others alike. The moderate bitterness to it continues to make it approachable to all audiences. The creamy and smooth body finishes it off to make it a very refreshing beer overall.

You can also see all of the photos featured in B.C. Beer Reviews, and some that do not make it into these articles, by following me on Instagram: nhendy5. And if you want to see more concise versions of these reviews up to 24 hours in advance, add me on Untappd: RedArmyNic.