3D Mario games are nothing new. We’ve had many different games in the past, with many different formulas. Unlike his blue rival, however, Mario’s 3D outings have always been highly praised, whether it be Super Mario 64 or Super Mario 3D World. Even with Mario’s high standards, Super Mario Odyssey manages to blow every one of his other games out of the water.

The story of Super Mario Odyssey is essentially the same as every other Mario game: Bowser has kidnapped Peach, Mario must rescue her. The difference here is that, for the first time in a Mario game, it was comical and interesting. Some scenes, such as the one before the ending credits, had me laughing so hard that I had to record the last 30 seconds to show to my friends.

Super Mario Odyssey is the best and most ambitious 3D Mario game ever, and potentially even the best 3D platformer ever. Movement in Odyssey is a joy in itself, with Mario going exactly where you want him to go, the most important part of any 3D platforming game. The controls feel good right from the get-go, but after playing for a while, you start learning how to pull off more complex and impressive maneuvers. By the end of the game, I felt like a wizard with all the crazy moves I could pull off.

Using Cappy, Mario’s new companion, you can capture a variety of creatures to give Mario more abilities. These don’t feel obstructive at all, and most of them are fun to use. You can capture classic enemies like Goombas or Bullet Bills, and also enemies brand new to Super Mario Odyssey, such as my personal favourite capture, Pokio.

Mario Odyssey is full of incredibly detailed kingdoms. With the enormous and complex controls you have over Mario, you can reach places that you wouldn’t dream of within any other platformer, making the unexpected, expect-able. This feels amazing, and is a reward in itself, but the developers foresaw players going to such locations, often placing hidden coins and other goodies. These little details are what make Odyssey feel like it was developed with love. I’d go as far to say the worlds are more detailed than in The Legend of Zelda: Breath of the Wild, although they are much smaller.

Each world is filled with three types of collectables: Power Moons, golden coins, and purple coins. The most important of the three are Power Moons, which are also the most satisfying to collect. They can be cleverly hidden in plain sight, or require you to complete certain challenges. Most of them are easy to obtain after one or two tries, but there’s some real challenges, as well.

100 purple coins are hidden in each kingdom, which act as a unique currency. Using them, you can purchase new outfits for Mario, or decorations for your ship. Regular golden coins also return in Mario Odyssey, but with an actual use. These allow you to buy outfits or moons. This may seem simple or bland, but it makes finding a hidden stack of coins very exciting and a worthwhile endeavor.

Super Mario Odyssey handles callbacks extremely well. Unlike in recent Sonic games, such as Sonic Forces, nostalgic elements don’t feel like they’re shoehorned in to get a few extra sales. Every reference to a past game in Super Mario Odyssey feels completely natural, and are an absolute blast to experience. (The Super Mario 64 outfit is my go-to outfit to play with).

The sound design in Super Mario Odyssey is magical. This includes both the sound effects and the music, which work in tandem with one another to provide subtle improvements to the presentation, similarly to how Super Mario Galaxy does. This clever mechanic is explained in detail in this YouTube video. It’s very subtle, but makes Odyssey all that more interesting to play.

Unfortunately, there are a few minor issues with Odyssey. Super Mario Odyssey is quite a short game, and you can only expect around eight to 15 hours of gameplay before you finish the story. This makes me desperate for some DLC with more environments to explore. Despite the short story, however, you’ll almost certainly enjoy the post-game content, which has you unlocking a few extra kingdoms and returning to previous areas for extra moons. I have enjoyed Odyssey for over 30 hours, which is a lot more than I put into most games. It would have also been nice if the outfits you unlocked had some sort of effect. As the game is, they’re mostly for cosmetic purposes, which seems like a missed opportunity.

The only glaring concern I have with Super Mario Odyssey is the absolutely dreadful motion controls. They’re practically useless if you’re going to play with a Pro Controller or in handheld mode. If it wasn’t for certain moves being locked behind these silly motion gestures, it wouldn’t be a problem.

Overall, Super Mario Odyssey is an incredible game. Like Martin McConnell wrote in his article, if The Legend of Zelda: Breath of the Wild didn’t sell you on the Nintendo Switch, Super Mario Odyssey absolutely should. Even if you’re not a fan of 3D Mario games, it’s certainly worth giving this one a shot.

Super Mario Odyssey earns itself a great score of 9/10 from me. 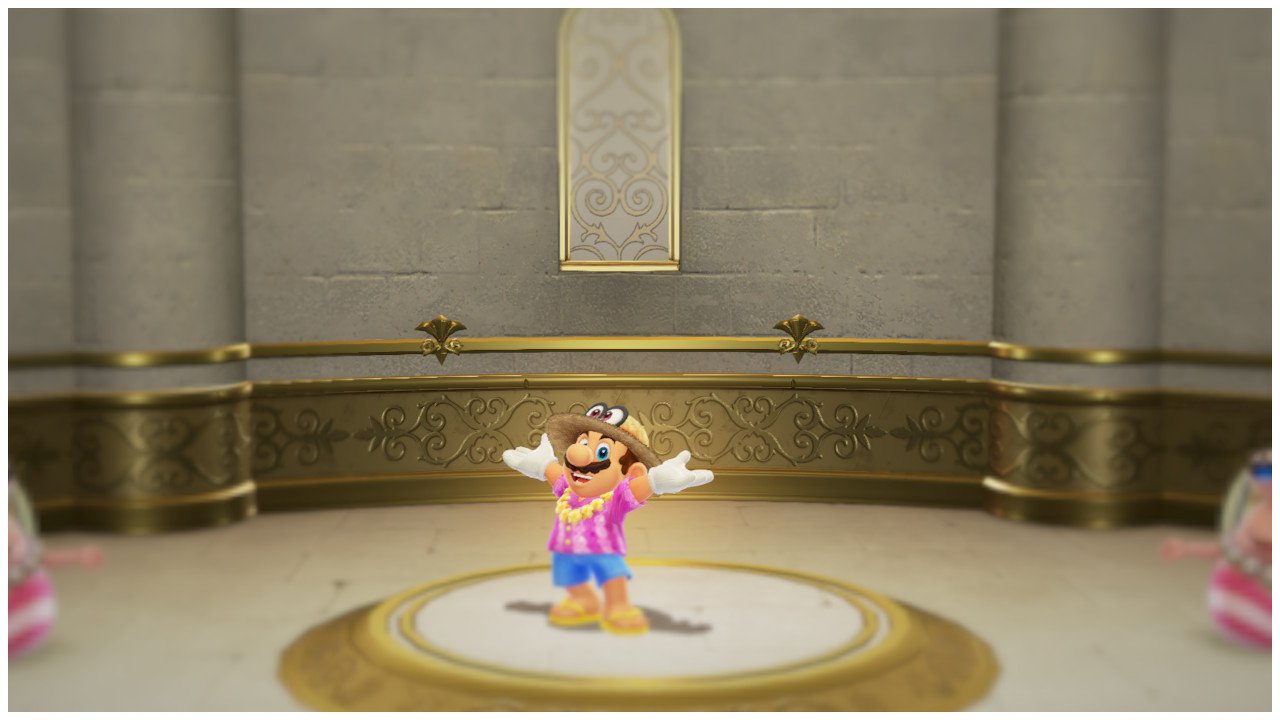