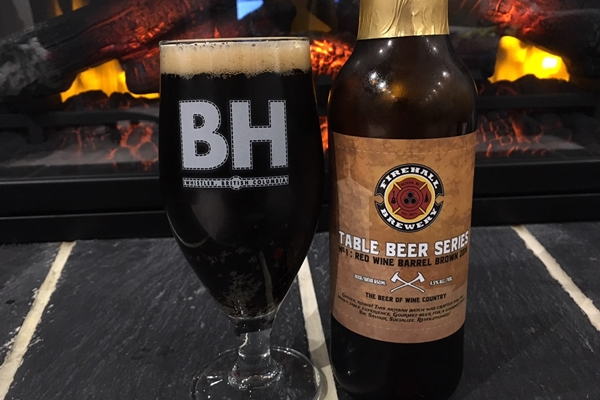 Firehall Brewery may not be a household name yet, but they certainly are not letting that stop them from making interesting beer. Today B.C. Beer Reviews will take a look at part of their Table Beer Series. This one is from 2016 and is a brown ale aged in red wine barrels. As the label says, this “the beer of wine country”.

It only seems fitting that a brewery in the Okanagan would incorporate wine into their beer. And what better way to reach the local patrons than to work together with what the area provides? This brown ale aged in red wine barrels is sure to be a very characterful beer. Let’s crack the bottle open and see how it measures up.

The beer pours an extremely deep brown hue from the bottle. This is much the same in the glass as well. One thing of note that is not common with the style is a very distinct reddish hue to it. You can catch this much more when holding it up to a light.

The first note you get in the aromatics is one that is common with a brown ale, and that is a nutty aroma. It could not be categorized as powerful, but it is the first thing you catch and it lingers throughout each sniff of this interesting brew.

In behind the nutty aroma is something you would expect from a red wine. You get a dry tannin-like aroma. It is an interesting contrast to the sweet and full nutty aroma that is common for the style. It adds another interesting dimension to what is otherwise a pretty straightforward style of beer in regards to aromas.

Overall, the aromatics hit the style and the red wine notes nicely. They are smooth and the tanning character is light enough to not take over. This makes for a rather well-balanced nose/aroma.

The prior two notes are once again the main players in the tasting notes. You get an initial sweet and nutty taste from the malt/grain bill accompanied by a very dry and tannin-heavy finish from the red wine barrels this beer was aged in.

The nutty notes hit the main check mark of the style, but the dryness of the red wine comes through much more. Very dry and tannin notes take over and make for an almost bitter finish to this beer.

Another note and one very much in the background is a slight woody taste. This is not the woody taste you can get from certain types of hops, but rather from the barrels this beer was aged in. Adds yet another dimension to a somewhat complex beer.

This beer leans heavily towards the wine notes in the tasting notes. It tricks you into thinking you are drinking red wine rather than beer.

The branding/labeling is a tan colour that looks like aged paper. There is the form of what looks to be a fire hall in the background, albeit that this is an educated guess based on the fact that the name of the brewery is Firehall Brewery. The gold wrapping around the top of the bottle and crown cap lid adds a nice touch of elegance.

This beer pours a moderate head at first, but the retention is nonexistent. It disappears as quickly as you noticed it.

The body of this beer is rather thin. It leans more towards the brown ale aspect here but is a bit thin even for that style of beer.

There is an extremely light level of carbonation in this beer. There is enough to be noticeable, but that is about all you could say about it.

The aromatics and tasting notes are the same, and that is the nutty character of a brown ale and a tannin-like dryness from the red wine barrels. The nutty notes are at the forefront of the nose/aroma and the dryness takes over the tasting notes. This throws you off a bit, but it makes for a very interesting beer to sit and sip on.

One thing should be said, and that is that if you do not like red wine, you very likely will not enjoy this beer. However, if you do then this is the beer of your dreams.