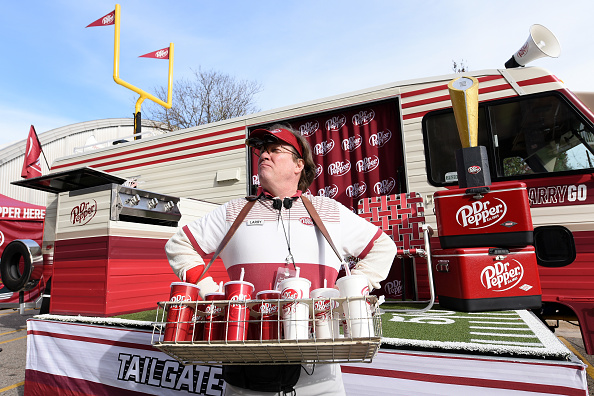 In a shocking turn of events, Dr. Pepper has announced the retirement of Larry Culpepper, the enthusiastic college football fan and soft drink peddler played with boundless charisma by James Connor.

BREAKING: Jim Connor, who spent the past several years playing football fanatic Larry Culpepper in Dr. Pepper commercials, has told me that the company will not feature Culpepper in commercials going forward. Connor says the decision “Rocked my world” and was “An incredible gig.” pic.twitter.com/an0DJBKO0w

In honor of the man that invented the College Football Playoff, here is a list of some of the greatest advertising mascots that were taken away from us before their time.

The Advertising Mascots Gone Too Soon

The GEICO Cavemen were the brainchild of Joe Lawson and Noel Ritter of The Martin Agency. The Cavemen made their debut in 2004 and featured in 21 unique commercials during their tenure. The tagline that accompanied them, “[it’s] so easy a caveman could do it,” was coined by Ritter and lent itself well to the nothing-sacred internet culture of the early 2000s.

The potential humor and the virality of Neanderthals in a modern setting made the commercial campaign wildly successful. So successful, in fact, that the characters, played in the commercials most notably by Jeff Daniel Phillips, Ben Weber, and John Lehr, were reportedly being adapted into a sitcom for ABC without Weber or Lehr attached to the project. The project didn’t make it past its pilot season that aired 2007. The commercials were cleverly written, and Lehr’s portrayal of the character warranted a brief return of the campaign in 2008. Ultimately, the GEICO Cavemen fell victim to the mindbogglingly high turnover rates of mascots and spokespeople employed by insurance giants.

Jon Moore created Spuds MacKenzie to advertise Bud Light beer at age 23. At the age when most of us are consuming unhealthy amounts of Bud Light, Moore created one of the most iconic and controversial alcohol-peddling characters in modern advertising. MacKenzie, a hard-partying bull terrier, debuted during Super Bowl XXI in 1987 and exploded in popularity. The character resulted in toys and clothing and even a parody character on the animated sci-fi cult classic Futurama named Slurms MacKenzie.

Unfortunately, MacKenzie was deemed too controversial to remain a face for Bud Light. Several special-interest groups, including the Center for Science in the Public Interest and Mothers Against Drunk Driving, spoke out against the character, as they believed the dog was marketing adult beverages in a manner that specifically appealed to children. Bud Light retired Spuds MacKenzie in 1989.

The McDonaldland Gang was a crew of characters developed as part of the McDonald’s Hamburger Restaurant marketing campaign. It went from the early 1970s until the early 2000s. The gang featured a host of characters including Mayor McCheese, Grimace, the Hamburglar, Birdie the Early Bird, and Ronald McDonald himself. To this day, the majority of these characters are still instantly recognizable. The Hamburglar and Mayor McCheese remain subjects of parody in the crosshairs of cultural lampooners. The popular mascots even spawned several video series and countless lines of toys. However, the marketing campaigns for the fast food juggernaut struggled to keep up with the company’s rapid growth.  Eventually, the characters were abandoned in favor of the “I’m loving it” advertising campaign.

Fred the Baker was developed as an advertising mascot for Dunkin’ Donuts in the 1980s and 1990s. The character rose to popularity played by actor Michael Vale for his entire 16-year run. Commercials highlighted Fred’s incredible work ethic, showing him rising before the sun to craft doughnuts for grateful Dunkin’ Donuts customers. His popular catchphrase, “It’s time to make the donuts!”, won the company a spot on the Television Bureau of Advertising‘s list of the best commercials of the 1980s. If you look carefully at some of the doughnut boxes sold by the company, you’ll find this catchphrase emblazoned on the cardboard above the paper latch.

The retirement of Fred the Baker is less heartbreaking than some of the other entries on this list. When the company decided that the character had come to the end of his run, they surveyed customers on how to best retire the beloved baker. At the customers’ behest, a retirement celebration was held. This included a parade in Boston, MA, and a free donut promotion on September 22, 1997.

No matter what your health nut friend from high school says, no one actually likes raisins. But no one could resist the smooth rhythm and blues jams of the fruity fictional band, The California Raisins. The concept for the sun-dried stars was initially conceived as a joke when an advertising writer named Seth Werner noted during a Sun-Maid ad meeting that they had “tried everything but dancing raisins singing [Marvin Gaye’s] ‘I Heard It Through the Grapevine’.” The claymation quartet comprised A.C., Beebop (drums), Stretch (bass), and Red. The group would go on to produce four studio albums, battle evil fruit in a video game, star in a 13-episode Saturday morning cartoon and an Emmy-nominated music mockumentary, and wind as the spokesraisins for Post Raisin Bran. Talk about a successful joke.

The California Raisins met their demise when the claymation campaigns became too expensive. At its outset, the campaign was costing raisin farmers more than half of their earnings to produce. Although the band broke up in the summer of 1994, there has been talk of reviving the characters for a CGI-film reboot as recently as 2015.

Erin Esurance: GEICO had made its millions hawking insurance with animated mascots, why shouldn’t Esurance? Because the internet ruins everything.

The Frito Bandito: Frito Lay’s iconic thief was animated by the legendary Tex Avery and voiced by the even more legendary Mel Blanc, but the unfortunate stereotypical characterization did not age well.

Little Mikey: Little Mikey did not appear in many Life cereal commercials, but the character spawned an urban legend about a kid that would eat anything, and that is certainly worth mentioning.