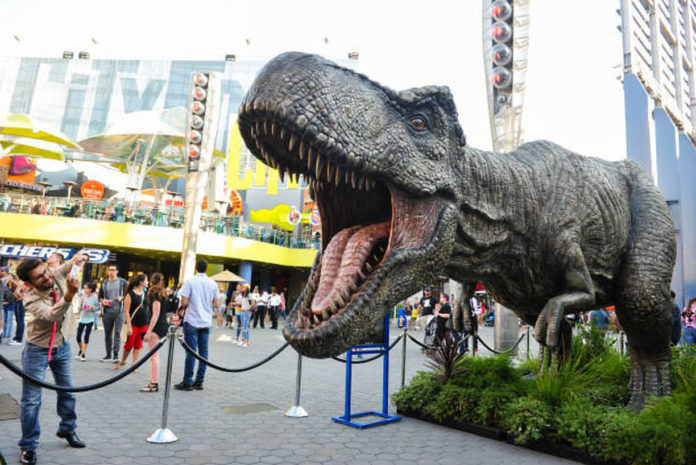 Jurassic World: Fallen Kingdom was released into the wild this weekend after a series of deliberations about its safety and likelihood of reproduction. The movie is already a box office success, but how do its characters and the story it tells measure up to its predecessors?

You Have Got to Be Troping Kidding Me

Chris Pratt is as good as you would expect if you were looking forward to seeing acting reminiscent of a two hour Michelob Ultra commercial minus the tasty beer that you sip to cool off after hiking a mountain or hanging out under a waterfall. Bryce Dallas Howard plays a commanding role as Pratt’s female counterpart and potential love interest which keeps everyone on the edge of their seat throughout. The escalating scale of comeuppance that the bad guys in the film received was comparable to an episode of Itchy and Scratchy. A fun fact is that the breathtaking cold open featured the giant shark from the new Jason Statham and Dwight (from The Office) giant shark movie (named after Peter Griffin’s daughter) that looks good if you like seeing Jason Statham get really upset at open waters.

Chris Pratt is basically a prehistoric Cesar Millan. He should be shouting, “Blue, you’re my dinosaur” at his favorite Velociraptor that he became best buddies with in Jurassic World. The movie seems to have been assembled in a hurry like the directors forgot the due date for the final cut until a few nights before. Fallen Kingdom brings forth images of Michael Bay, M. Night Shyamalan and Nicolas Cage playing Gin rummy (while passing around a bottle of Bombay, of course) in their AirbnIgloo during their ice fishing expedition to the Arctic Circle and taking a break to hastily design a plot. J.A. Bayona, the director, must have a fetish for redheads as a Bryce Dallas Howard lookalike showed up in an elevator scene.

The Indoraptor is Basically a Demogorgon

You might say this movie is like if Stranger Things married Planet of the Apes (this would have been a safer tweet for Roseanne). The Indoraptor is a boss on Donkey Kong, a creature created in a lab to eat humans trying to complete dares. Vince Carter was appointed the Indoraptor after he jumped over an actual seven foot person in a basketball game in the Olympics (a real regulated one with referees and everything). Jurassic World: Fallen Kingdom ventures into Ex Machina territory with a heavy dusting of dinosaur fossil dust. It is also critical to note that in the preview of the new Grinch movie, the Grinch ate a pickle out of a jar at the grocery store then put it back in the jar then placed the jar in a lady’s basket, basically a cartoon Ferris Bueller move.

The Bad Guys Are Really Bad

This is perhaps the most critical lesson to take home from the theater. Don’t confuse yourself into thinking these bad guys might have a soft side; they are basically the worst people in the world and PETA would be very upset with their heinous ways. And the lead bad guy is the worst of them all, obviously. This young Mr. Burns is biting at the chomp to take over his father’s empire of evil and become the next Darth Vader. The rest of the cast of bad guys basically look extras from The Expendables. The army bad guy is R. Lee Ermey after owning and operating a mini golf course in the San Fernando Valley for several decades or just getting home from a 311 Cruise with Doug Benson.

The Geico Gecko would have been served as an appetizer for the retirement party at the Dinosaur’s Club (their version of the Elk’s Club). Chris Pratt’s physical humor (he certainly perfected the art of the Prattfall) stood out as the funniest part of a movie that was about as funny as the people on a Russian subway. Jeff Goldblum served the role of Richard Dreyfuss in Stand by Me as he narrated like he was hosting an NPR show called, “The T-Relaxing Hour.” The Rock would have been a welcome edition to the story as he would have undoubtedly defeated the Indoaptor in a cage mage on the roof of a skyscraper. At the end of the day (this is my press conference), the newest installment of the Jurassic franchise delivered exactly what it promised and nothing more; an entertaining movie that might offer a few chances for you to hurl your popcorn into the air in excitement.