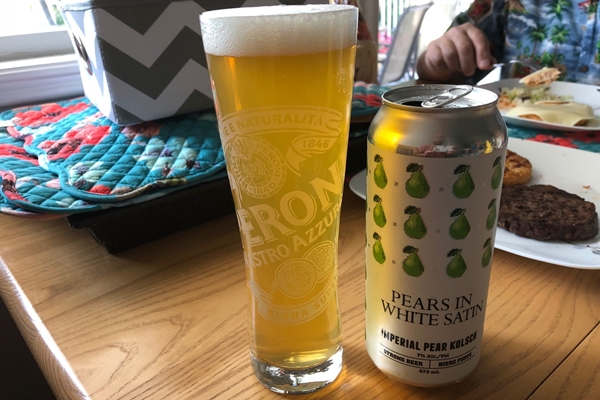 Collaboration beers, while common nowadays, are hard to hit home with. You take two breweries, in this case, Fuggles & Warlock and Moody Ales, and you brew a beer that has likely never been brewed by either. This is where Pears in White Satin comes into play, an Imperial Kölsch clocking in at 7.0% ABV. Let’s take a look at how this sometimes daunting task turned out.

As you would expect from the style, this is a fairly clear golden straw colour. There is a bit of cloudiness to this brew, especially upon pouring the bottom of the can into it. Even then, it is still clear enough to see through it.

There is no doubt that there is a strong pear aroma to this beer. There is a very noticeable sweet fleshy fruit aromatic that you get from pear that is complimented nicely by a tart citric aromatic. It is nicely balanced and makes this a nice beer for a sunny day.

Aside from that, there is a noticeable sweetness from the malt/grain bill. This is usually the case with this style, so it matches up nicely stylistically. It is undeniably a background note to the pear present throughout.

As is the case in the aromatics, the pear comes out very nicely on your palate. The balance between being sweet and tart happens once again, and it makes for a very easy drinking and tasty summertime beer. It comes off like a very crushable beer and makes it deceivingly drinkable at an impressive 7.0% ABV.

There is the common sweetness to the body and finish with a Kölsch in this one. The one thing that you get that is not at all common with the style is a bit of a tartness to the finish. This is also accompanied by a slight boozy taste, albeit very light.

The branding/labeling screams Fuggles & Warlock right off the bat. A plain white label has green pears that are pixelated all over it. This is accompanied by the beers name and the name of the two breweries of Moody Ales and F&W.

There is a high level of carbonation to this beer, something that is common with a Kölsch. It makes for an above average head from the pour and a very solid head retention to this beer.

As is the case with the style, this beer has a light and easy drinking body and a crisp finish to it. It makes it much easier to drink, especially given how high the ABV clocks in at.

This beer turned out rather well overall. The pear was powerful yet pleasant in both the aromatics and the tasting notes. There was a nice crispness to the finish and it was not overly sweet for the style. Overall this is a well-done collaboration beer between Fuggles & Warlock and Moody Ales.