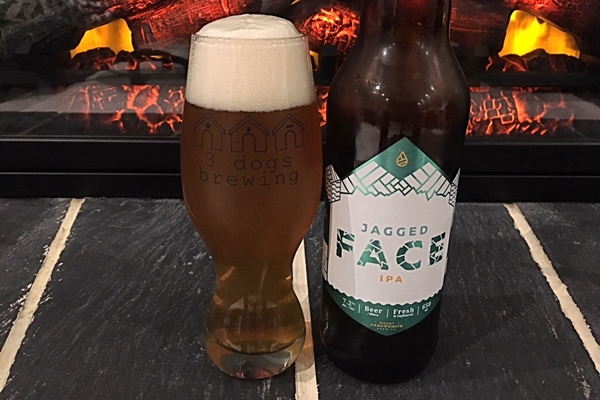 Mount Arrowsmith Brewing is a young brewery that made a name for themselves by already winning multiple awards, one being Rookie of the Year at the B.C. Beer Awards last year. They have distributed their beer far enough from their brewery that many have tasted their brews. B.C. Beer Reviews is here today to take a look at their Jagged Face IPA, so let’s see what they put into the bottle.

This beer is a bright golden-copper colour from the bottle and in the glass. It undeniably matches up stylistically with an American IPA. The clarity is above average, but not pristine.

As stated on the label, there are strong aromatics of citrus and tropical fruits. To be more descriptive, there are strong notes of grapefruit and more general tropical notes with it being to put a finger as to what they are with all of the hop aromatics and malt aromas coming through. There is also a light pine aromatic at play here as well.

There is a strong malt aromatic profile that brings this beer into balance. You get the typically sweet and light notes of a pale malt and a nice light sweetness that is almost caramel-like from the Munich malts used. This works nicely in conjunction with the hops to stay within the specs of the style.

The one thing that is interesting is that there is a noticeable yeast aromatic that you generally do not get with clean and balanced brews like this one. This is not necessarily an off-aroma, but it catches you off guard a bit with the rest of the notes at play here.

This beer matches up with American beers. It has a strong bitterness to it that is best categorized as pine. There is also a strong grapefruit pith bitterness to this beer. This matches up perfectly with the style.

The malt/grain bill plays a major role on your palate, much like it does in the aromatics. There is a sweetness imparted by the malts that helps to make this a well-balanced beer with the piney and grapefruit pith bitterness. This could best be categorized as lightly toasted bread and even a touch of caramelized sugar.

Overall, this beer is balanced and well within the realms of an American IPA.

The branding/labeling on this bottle from Mount Arrowsmith Brewing is sleek and clean. There is a white label with lettering and designs that are a green-teal colour that looks like pine. It is simple, yet vibrant and eye-catching.

The head this beer pours is significant, as it should be with this style. It is a massive and pillow-like head. The retention of that head is equally as impressive.

There is a significant amount of lacing on the glass from this beer. It is coated from top to bottom.

The carbonation level is well within the specs of the style. There is a lightly crisp finish to helps to accentuate the bitter and piney notes on the back end of your palate.

This beer is a good representation of what an American IPA. There are strong notes of grapefruit pith and pine complimented by very light and indistinguishable tropical fruit notes. There is a nice body to the beer and it is smooth, yet crisp enough in the finish to accentuate the hop character.