The month of May will always hold a special place in my heart. May is recognized in the U.S.A. as Brain Tumor Awareness Month. However, this has carried throughout the world to many different countries. 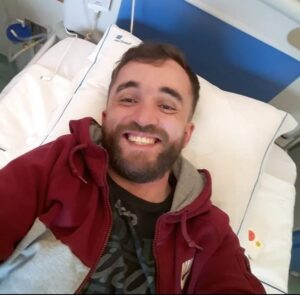 My work called an ambulance in the early afternoon on 3 December 2018, due to me experiencing severe chest pains, and I convinced myself it was a heart attack. The whole left side of my body was numb. The ambulance came to pick me up, and after some quick tests, they told me my heart was okay.

I was born in the UK but had been living in Lisbon, Portugal, for just over a year. So, being in a foreign hospital and not speaking the language only added to my confusion. I was lucky to have three close friends by my side.

After spending more than 10 hours waiting, I finally had an MRI, and after waiting on a hospital bed in a corridor, the doctor came over and told me:

“We’ve found a large tumor in your brain.”

I remember just thinking, he is wrong, no way can I have a brain tumor. He explained it had likely been there and growing for many years. The fact it was slow-growing was positive, as that suggested it was benign and operable.

The Aftermath of The Diagnosis 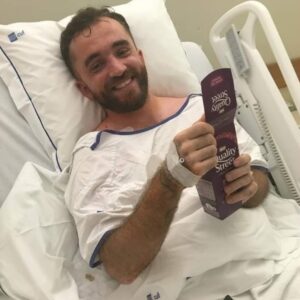 After leaving the hospital on the morning of 4 December, I went straight to work to let some close friends know how I was. Moving abroad and working alongside people in the same situation made us all a tight-knit group, so I wanted to be around them.

As the days went by, I began to experience worsening symptoms. At points, these symptoms convinced me I was going to die, despite the hospital telling me they were confident the tumor was benign. I began to put on weight as I struggled to leave the house and ate horribly. My symptoms worsened, and my head felt like it would explode. Physically and mentally, I was not in a good place.

Despite the hospital feeling confident, the tumor was benign. They stressed the surgery was imperative due to the size of the mass. It was close to the fourth ventricle of my brain, which is between the brainstem and the cerebellum. Where the tumor was situated and because of its size, if left untreated, it could prove fatal.

The wait between my diagnosis and the operation felt like an eternity. The surgery was confirmed for 3 January 2019. I was relieved but equally scared over what lay ahead. 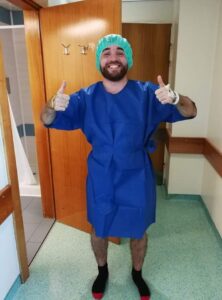 Operation day finally arrived, and one of my good friends accompanied me to the hospital. On the way, my friend sensed I was anxious, so she randomly started singing “Three Little Birds” by Bob Marley. It made me laugh, which was just what I needed and highlighted what a great person she is to be able to alleviate my fears so quickly.

Once in the operating theatre, the nurse asked me to count to 10, and I remember getting to 5 and my eyes closing as the Anaesthesia began to work. The surgery was due to last over five hours and involved them removing part of my skull to extract the tumor. 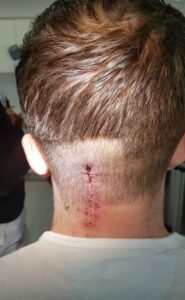 I remember waking up from the operation like it was yesterday. The relief of hearing voices and understanding them was immense. I was discharged from the hospital four days later because I had healed so well physically. Little did I know, the biggest fight was yet to come! Soon after leaving the hospital, I kept experiencing these constant waves of sadness. I felt like a burden, and I just wanted to go back to how life was before.

No one had warned me about the potential mental health struggles I may encounter, despite The Brain Tumor Charity stating that 91% of people say their tumor has affected their mental health. I can relate to this heartbreaking statistic. Even simple tasks like showering were overwhelming for me.

During my darkest moments, I lent on a small group of friends for support. Despite their loyalty and compassion, I realized I needed professional help and went to see a therapist. I was embarrassed I needed help. The therapy ultimately helped me accept how fractured my mind was, and I slowly began to work through my feelings instead of living in ignorance, which had taken me to the verge of ending my own life. 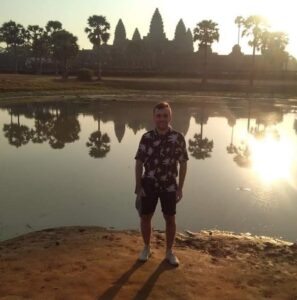 My mental health finally improved once I moved to work for a travel company which my best friend Daniela arranged for me. Working on the phones in a fast-paced environment was what I needed. Working with her and meeting some new friends saved my life!

I could feel myself slowly repairing. I began to enjoy life. Despite the improvement, I was anxious about being on my own and always craved company. At the beginning of the pandemic, I decided to travel alone to Asia for a month. During this trip, I began to fall back in love with my own company.

I feel I have changed since the surgery but in the best possible way. I have an appreciation of life that I did not have before. For anyone going through treatment for a brain tumor – you must be kind to yourself and be patient. It is vital to break up your day with tasks, even small ones. [wpdiscuz-feedback id=”elvau1dp3l” question=”What are your tips when dealing with the treatment of a brain tumor?” opened=”0″]It will give you a sense of fulfillment which will be of paramount importance in your recovery[/wpdiscuz-feedback]. I feel so fortunate every day, and I try to live in the present as much as I can. Please remember if your recovery is difficult, please keep going. However challenging life is at the moment, it will not last forever.

Check out our article with 5 tips on how to boost your mental health.