July 2022 marked the twenty-fifth anniversary of Japanese animated filmmaker Hayao Miyazaki’s 1997 film Princess Mononoke. The film was a departure in his work from the lighter, sunnier fare of Miyazaki’s earlier films like My Neighbor Totoro and KiKi’s Delivery Service, towards themes that Miyazaki’s work is now known for, like environmentalism and humanity’s inherent moral ambiguity.

Princess Mononoke became  Japan’s highest-grossing film to date and highest-grossing animated film up to that point, until losing both titles to Miyazaki’s later film Spirited Away. Despite this, the film suffered from a lack of an advertising push and underperformed upon release in the U.S.

The film is set during the Muromachi Period, a period in Japanese history that roughly spanned the 1300s-1500s. The Muromachi Japan of the film is a magical realist take on Japanese history, in which animals are not only sentient, but can speak, and some rule the wilderness as chieftains, kings, and gods. A prince of the Emishi people, Ashitaka, encounters a boar while hunting that has been gravely wounded, and cursed, by an iron weapon.

It passes its curse onto Ashitaka, and although he is dying of his malevolent wound the prince resolves to go on a quest to find the origin of the boar’s curse. His travels take him to the forest settlement Iron Town, where an enigmatic aristocrat named Lady Eboshi is building a mining town that is also a haven for lepers and marginalized women.

She is violently driving animals out of the forest to do so, however, and opposing her is the mysterious bandit that the people of Iron Town call Princess Mononoke. Mononoke itself is a Japanese word that means, roughly, vengeful spirit. The girl that the villagers call Mononoke is actually San, a human raised by wolves who sabotages and raids Iron Town in her quest to defend the forest from human encroachment.

The stage could have easily been set for a clear-cut tale of good vs. evil, with San and the forces of nature on the side of the angels, and Lady Eboshi the personification of mercantile greed.

Beyond Good And Evil

Neither San nor Eboshi is a clear-cut heroine or villainess. Eboshi is destroying the forest with her mining operations, killing the supernatural forces that inhabit it, but she is also earnestly concerned with the welfare of society’s most vulnerable. San is striving to protect the forest, her family, and the old way of life, but she uses violent tactics to do it and hates humans though she is human herself. With Princess Mononoke, Miyazaki deliberately set out to explore humanity’s contradictions. Miyazaki stated of the film and its characters,

“People who are not evil diligently take actions thinking they are for the best, but the results can lead to terrible problems.”

The violence and aggression of the film were a stark contrast to Miyazaki’s earlier family-friendly work and a reaction to his disillusionment at the decade’s tumultuous global events.

Princess Mononoke was an unequivocal success in Japan but faced a different fate in the U.S.  Disagreements between Studio Ghibli and the U.S. distributor, Miramax, over the film’s running time led to a lack of advertising for the film, and it underperformed upon being released in the U.S.

Despite not making waves when it was first released in the U.S., Princess Mononoke has only grown in popularity and relevance as climate change’s effects become more apparent and cataclysmic in real life.

With Mononoke, Miyazaki set the stage for fellow Japanese animated filmmaker Makoto Shinkai’s films, by exploring themes of human nature and humanity’s relationship to nature-which is sometimes harmonious, but sometimes mutually destructive. Reflecting the changing times of the period in which the film was released, Princess Mononoke didn’t shy away from the violence and complex emotions that powered the film’s conflict between humanity and nature. 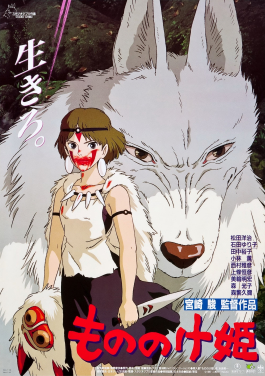 By IMDb, Fair use, Link