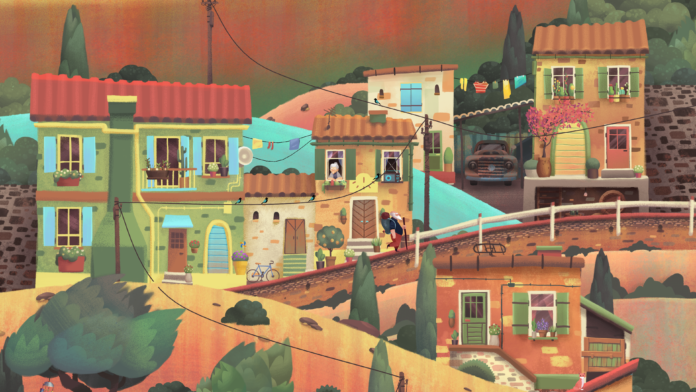 Hello, and welcome to Games You Should Be Playing. This series aims to highlight those games, from indie to AAA, that should be at the top of every gamer’s list. Although titles will inevitably slip through the cracks, there are some out there that you just can’t ignore. This week, we’ll be highlighting a title known as Old Man’s Journey. If you missed last week’s article on Unbox: Newbie’s Adventure, you can check it out here.

Remember that movie, The Book of Life? Old Man’s Journey almost reminds me a little bit of that, but mixed with an impressionist painting. The art style is gorgeous, the gameplay is, above all, creative. And most importantly of all, I think, you can practically feel the soul of this game gushing out of every level. So let’s take a look at what makes this game so special, and why you should be playing it.

Games You Should Be Playing: Old Man’s Journey

Again, this game has an absolutely adorable art style. I cannot stress that enough, but boy, I can try. Broken Rules has a tremendous art studio, and Old Man’s Journey is an incredibly fine work. It’s almost got this Spanish or Latin American feel to it, and the charm is second to none. You’ll immediately be entranced by this title’s very presence, and the art direction and character design help with that incredible feeling of immersiveness.

In addition to the art itself, this game’s animation is strikingly smooth. Rarely, if ever, are there frame rate jumps in Old Man’s Journey. All the animation for this game looks great, and even with a cartoonish motif, it never seems unnatural. In a phrase, this game’s art is very “down to earth.” I’m not sure if that makes sense, because that’s usually a phrase we use to describe certain celebrities or wealthy people. And yet, this game always feels so natural. It feels real, and like a living and breathing world. In today’s gaming landscape, you have to have that, and Old Man’s Journey has it in spades.

Simple, But Deeper Than You Think

For as sweet and cartoony as it looks, there’s a lot more to Old Man’s Journey than meets the eye. First off, this game is all about soul-searching and finding one’s true self. Now, that is one hell of a noble cause. Truly, it’s a theme that we don’t often see covered in video games. Titles like Grand Theft Auto or Pokemon don’t lend themselves to philosophical discussion all too often, unless you’re just looking way too hard.

Even with a game like Journey, which was seen as the game that kickstarted this “super deep indie game” movement, barely tackles this motif. And yet, Old Man’s Journey dives right into it, full force. This game is not afraid to get metaphysical and philosophical with you. Rather, it expects you to embrace it, and the charm of this game will pull you right in. I think that’s a big part of what makes this title so potent. It reels you in with the cute art style, and then punches you right in the gut with the heavy stuff.

Remember that super weird game that came out on the PSP, Loco Roco? There was something weirdly cute about that game, and the physics in it? Yeah, Old Man’s Journey is almost like that game, in some respects. The main mechanic is you shifting the world around the old man so that he can traverse his path. But Loco Roco never had a story theme like this game does.

In story respects, I guess this game is a little bit like the “walking simulators” you’ve seen popping up a lot these days. Think of maybe Life Is Strange, or something like What Remains of Edith Finch (more on that game sometime soon). Except this game has a lot more solid gameplay than those other two. Nothing quite compares to the satisfaction of the puzzles in this game. Especially with the harder puzzles in this game, it’s almost like a sigh of relief. This game isn’t overly hard on a consistent basis, but when it does get up there, it feels amazing to finally solve those puzzles. Really, if you’ve got an iPhone or a PC that can play games, you have to give this one a shot. The folks at Broken Rules deserve it.