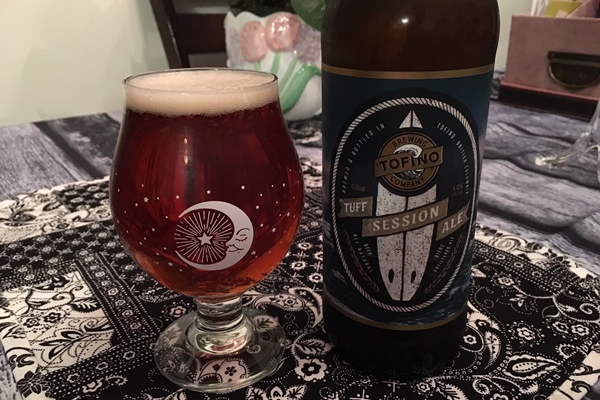 B.C. Beer Reviews is back again to take a look at the second entry into this series by Tofino Brewing. Their first entry was one of the first ever articles, their Dawn Patrol Coffee Porter. While the Dawn Patrol was certainly more adventurous, this is still a popular beer for them.

The Tuff Session Ale is one of Tofino Brewing’s five beers that are available year round. And with the lightness of the body, the bitterness and the ABV content, this is truly a beer you can sip on year-round.

This beer pours the same colour as it is when the glass is full. It is a deep, almost copper, colour to this beer. Certainly what you would expect from this style of beer.

There is a citrus and hoppy aroma to this beer. You can certainly smell very distinct characteristics that are commonly associated with bitter beers.

There is also a rather strong malty smell to the nose/aroma of this beer. The bottle says to expect a toasty malt bill, and you certainly get that from this one. While it is certainly present, the hop characteristics are definitely the dominant part of this nose/aroma.

The nose/aroma of this beer is very well balanced, especially for a West Coast-made pale ale. Normally you would come to expect a pale ale from this area of the continent to be very hop-forward in aromas, but this one balances the citrus notes and the sweet malty characteristics perfectly.

As stated above, this is a fairly well-balanced beer overall. The bitterness and malt characteristics are both very noticeable and present throughout. It is not overly bitter, nor is it overly sweet from the malt/grain bill.

The labeling/branding is a nice logo indicative of the area Tofino Brewing is located in. It is a circle made of rope with a large surfboard and their logo on the inside of it. The background of the entire label is a somewhat cloudy sky on top of a deep blue and somewhat tumultuous ocean.

This beer pours a moderate head overall. If you pour it meticulously you get a small head, but a normal and decently solid pour will produce a much more significant one. The retention of that head is slightly above average.

There is also a decent amount of lacing with this beer. You would not say that it coats the glass, but it is certainly present throughout.

The mouthfeel is very thin to this beer, which is a nice thing. On top of that this one finishes fairly dry. Both of these qualities, combined with the well-balanced beer, makes it a very sessionable beer overall.

Tofino Brewing definitely hit the nail on the head with making a sessionable beer. Well-balanced, not too bitter or too sweet, has a thin body and it finishes dry. Makes for a perfect summer beer and a decent beer any other time of the year as well.

You can also see all of the photos featured in B.C. Beer Reviews by following me on Instagram: nhendy5. And if you want to see more concise versions of all these reviews up to 24 hours in advance, add me on Untappd: RedArmyNic